Portrayals of Peter in the Four Gospels and at Philippi 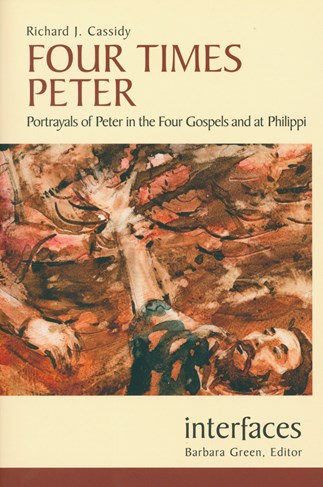 Because he plays such a prominent role in the New Testament and the tradition of the church, the apostle Peter has been the focus of much scholarship over the centuries. One wonders whether there can be anything more to say about Peter. Indeed, there is. In Four Times Peter Richard Cassidy takes a narrative critical look at Peter in the story of each gospel individually (rather than studying Peter via a side-by-side analysis of the gospels). Cassidy looks first to the character of Jesus in each of the gospels and then to the group of apostles as a whole before turning to Peter.

In the end, Four Times Peter allows an intriguing portrait of this apostle to emerge. Readers discover a portrait of Peter that would have been familiar to the earliest Christian communities. And it is this ancient portrait that gives modern readers a refreshing new sense of Peter.

This book is part of the series Interfaces.

[A] particularly valuable and thought-provoking contribution to the study of the Gospels because it raises crucial questions about the ways in which a person or event is perceived to create meanings.
Toronto Journal of Theology

. . . an interesting way for students of the New Testament to probe more deeply into its rich texts and complex history.
The Bible Today

This small masterpiece is a valuable addition to studies of Peter and of the four Gospels. Worth rereading and keeping on hand as a resource, it would work very well in academic and pastoral situations.
Horizons

What a refreshing change to find a reading of the Gospels that takes them seriously as four individual performances of the Jesus tradition, yet gives us scope for assessing their combined imaginative impact on the earliest Christian communities. Meticulously positioned within the discipline of narrative criticism, Cassidy's fine study of Peter in the fourfold Gospel tradition highlights the crucial role played by this imperfect disciple in all four canonical Gospels, and brings to the fore the 'sheer gratuitousness' of Peter's call and his 'justification by grace'.
Loveday Alexander, Professor of Biblical Studies, University of Sheffield, UK

Richard Cassidy has written a helpful study of the person of Peter, as presented in the New Testament. Adopting bold approaches to the nature of the Gospels and their readership, he develops a reading of Mark, Luke, Matthew and John that is as attractive as it is challenging. His final speculation on the arrival of the Petrine tradition and then thefour gospels in Philippi is as provocative as it is stimulating.
Francis J. Moloney, S.D.B., Salesians of Don Bosco, Australia.

It shows a depth of research and has some fine exegetical insights.
The Furrow

This engaging book will lead unsuspecting students through a careful study of the Gospels using narrative criticism, social-world analysis, and theological interpretation while they are having so much fun that they won't realize this is `homework.'
Sharyn Dowd, Associate Professor of New Testament, Baylor University, Waco, Texas

A must read for beginners and an excellent refresher for all those who already know and possess a deep appreciation for the four canonical gospels.
Comptes Rendus

The understanding of the figure of Peter in the Gospels is confessionally overloaded. The only way to have a fresh look is to perform a close reading of the texts. Richard Cassidy has good tools to do that: narrative criticism and reception history. His book is clever, nice to read. It gives new insights about this great figure among the disciples of the Nazarene. The reception of the four gospels by the Christian community at Philippi is the final masterpiece of the book!
Daniel Marguerat, Faculty of Theology and Religious Studies, University of Lausanne, Switzerland

This book is to be recommended as a work that has its intended audience very clearly in mind. It is highly suitable for use with college students pursuing a course in the study of the New Testament, as well as by Bible study groups seeking a way into a study of the Gospels themselves. Through this study of the role of Peter in each of the Gospels, new questions will arise in the minds of the students both in class and in discussion groups. The final chapter of this book is without doubt the most stimulating. Without doubt, this chapter alone is worth the price of the book.
Review of Biblical Literature

Is Peter Catholic, or Protestant, or Jewish, or ...? Richard Cassidy sketches a picture in his book beyond every confessional claim. He looks at the figure of Peter with the eyes of the four Evangelists--from four complete independent and original perspectives. But not enough: in the end he puts himself in the place of a Pauline parish in Macedonia, which comes to know the texts of the four gospels step by step. For us today that means a fifth time Peter: everybody encounters the fisherman from the lake Glennesar in his or her own world and context. This portrayal, drawn by means of narrative criticism, will take an unmistakable place among the numerous books about Peter for long.
Professor Christfried Böttrich, Ernst- Moritz- Arndt- Universität, Greifswald, Germany

This is a great scientific work of an expert Richard J. Cassidy, a priest and professor of Sacred Scripture at Sacred Heart Major Seminary in Detroit, Michigan. . . . this is an important simplified but rich book for all who want to know more.
LIVROS NOVOS

This narrative-critical reading of the figure of Peter in each of the four Gospels offers a refreshingly different way into the Gospel narratives. Especially novel is the experiment in `reception criticism.' Presupposing that the Gospels were all written for general circulation around the churches, Cassidy asks how each Gospel's portrayal of Peter would have been received in the church at Philippi. Students and others will find this a very accessible and also thought-provoking approach to the Gospels and their early readers.
Richard Bauckham, F.B.A., F.R.S.E.; Professor of New Testament Studies and Bishop Wardlaw Professor, St. Mary's College, University of St. Andrews, Scotland

Four Times Peter is a window into the construction of the character of Peter in each of the four gospels and a fascinating reconstruction of how the gospels might have been read at Philippi. By focusing on each gospel in turn Richard Cassidy draws out the character of Peter from each narrative context with striking clarity. This book lends itself to use in both classes and discussion groups because it invariably raises provocative questions about the nature of the gospels and the ways in which they were read in the early church.
R. Alan Culpepper, McAfee School of Theology

Richard Cassidy once again demonstrates his skills as a careful reader of texts and an engaging and effective teacher. By approaching the figure of Peter from the perspectives of narrative criticsm and reception history, he casts news light on Peter and on each of the four Gospels. in doing so he makes the New Testament come alive in both the 1st- and the 21st-century settings.
Daniel J. Harrington, S.J., Weston Jesuit School of Theology, Cambridge, MA

Using the category of `paradigmatic readers,' Richard Cassidy combines insightful narrative-critical readings of the role of Peter in each of the four gospels with an imaginative recreation of how they might have actually been received by real readers in the Pauline ekklesiai at Roman Philippi. A valuable case study in integrative method in gospel studies, and a thoughtful contribution to the on-going debate about Gospel audiences in the early church.
Margaret M. Mitchell, Professor of New Testament and Early Christian Literature, The University of Chicago

An excellent text for intermediate to advanced courses on the Gospels and parish study programs.
The Midwest Book Review

In his new work, Richard Cassidy undertakes a fresh look at the apostle Peter in each of the four canonical gospels, with the assistance of narrative analysis. Insofar as Peter is often portrayed in the gospels as a representative disciple, all believing readers become involved. Insofar as Peter as a historical person played (and plays) a foundational role, issues of Church leadership are raised. The reception of Peter in Pauline community, Philippi in Macedonia, is also explored. In an unprecedented appendix, Peter's words are set forth for the reader's reflection. All in all, this work is welcome as a well-informed, contemporary, guide.
Benedict Thomas Viviano, O.P., University of Fribourg, Switzerland