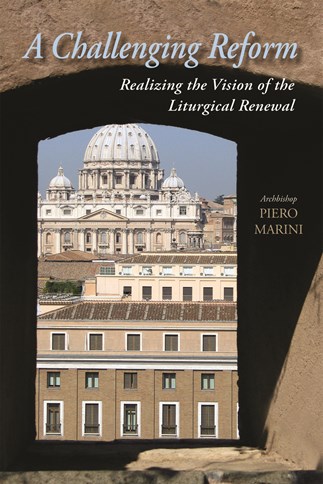 Realizing the Vision of the Liturgical Renewal
Archbishop Piero Marini

In these pages Archbishop Piero Marini reveals the vision, courage, and faith of the pastors and scholars who struggled to implement the Second Vatican Council’s teachings on the liturgy. While in some circles it is fashionable to propose a reform of the liturgical reform, any such revision needs to take into account the history of the consilium’the organism established by the Holy See to carry out the initial liturgical changes. This story of the work of the consilium offers a fascinating glimpse into the struggles and tensions that accompanied the realization of the council's dream to promote the "full, conscious and active participation" of the faithful in Roman Catholic worship.

Piero Marini was ordained on June 27, 1965. He became the personal secretary for Archbishop Annibale Bugnini in 1975 and in 1987 was appointed the head of the Office for the Liturgical Celebrations of the Supreme Pontiff, a position he currently holds. In 1998, Marini was appointed Titular Bishop of Martirano, Italy, and was ordained bishop the following month. In 2003, Marini was appointed Titular Archbishop of Martirano. He also served as the Master of Pontifical Liturgical Celebrations from 1987-2007.

A Challenging Reform is the best single-volume overview of the beginning of the liturgical reform.
America


Archbishop Piero Marini has produced a work of considerable merit and importance. His title, A Challenging Reform: Realizing the Vision of the Liturgical Renewal. With remarkable objectivity he chronicles in meticulous detail the stages of development of the liturgical reform set in motion by Vatican II. . . . It is very impressive to see in this account the great care with which the whole enterprise was conducted. Clearly it was carried out with the kind of organizational skill and discipline which marks the highest kind of scholarship. . . . Archbishop Marini has written a valuable work. More important, he has lived the ideals of the Church.
Archbishop John R. Quinn


Archbishop Piero Marini has done historians a service in tracing the development of the modern liturgy.
First Things


Archbishop Marini's book is a very valuable service to the historians of Vatican II and its implementation, and places on record the immensely influential work done by those entrusted with renewing the Church's worship.
The Furrow


Marini offers unique insights into an important institution in the life of the post-Vatican II Church.
The Jurist


Marini has done a charitable service for the Church by keeping fresh the vision of the Council Fathers. It is a helpful work at the onset of the twenty-first century as the Church continues visioning and realizing this challenging reform of liturgy.
Pastoral Liturgy


Marini's book is a reminder that the Second Vatican Council was and continues to be a defining moment for the Church-something many younger Catholics have never experienced or older Catholics have already forgotten, because of the overly controlling and authoritarian style of ecclesiastical office holders.
Catholic Books Review


There is much to praise here. The prehistory of the council is told succinctly. Clear paragraphs offering `conclusions' close each chapter. An appendix presents primary documentation translated into English. Two indices help make quick references back to the main text. It's a book lover's book. Editors Mark R. Francis, John R. Page, and Keith F. Pecklers deserve our thanks for bringing this work to an English-reading audience.
Pastoral Music


Archbishop Marini has offered a concise history of the Consilium and its contribution to the realization of the liturgical renewal in the Church. The author's collaborative style is exhibited in the fact that he engaged three liturgists to assist in the editing of his work: Fr. Mark Francis, CSV; Dr. John Page, former Executive Secretary of ICEL; and Keith Pecklers, SJ. Fortunately, Archbishop Marini's 2007 appointment as President of the Pontifical Commission for International Eucharistic Congresses offered him time to record a significant slice of contemporary liturgical history of which he was a part-with both its tedious tensions and awesome achievements.
Verbum SVD


Marini's book is a meticulous and careful record of the earliest period of liturgical reform.
Anaphora


[A]nyone interested in the initial stages of the liturgical reform after the Second Vatican Council will thoroughly enjoy this book.
Worship


People, especially Catholics interested in liturgy, the Second Vatican Council will be very interested in this book since it is by a person who is an authority on liturgical matters. The book tells the story of the person who was in the midst of the liturgical renewal and who was responsible for getting things done.
Gregorian Book Review


In this wonderful book the reader is encouraged to rediscover the vision, courage, and faith of those who struggled in the past as the story of liturgical reform is shaped for the future.
Celebrate!


This volume is a wonderful review of the process of reform. . . . Those wishing a window into the process, and the `blood, sweat, and tears' that went into the liturgical reform, will appreciate this memoir from one who has specialized in supporting our liturgical renewal.
Emmanuel


A penetrating analysis of the tensions which surrounded the liturgical renewal in the Catholic Church during the Vatican Council and afterwards. This book also offers fascinating insights into how the Vatican works.
Timothy Radcliffe