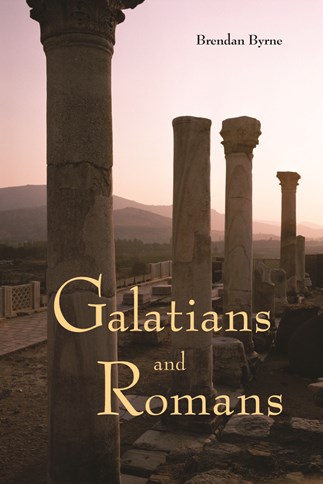 Of all the writings of Paul none have made so signal a contribution to Christian life and identity as the Letter to the Galatians and the Letter to the Romans. While written at quite separate stages of his apostolic career and very different in tone, the two letters unite in projecting above all a common vision of God as a God of grace. Both call for a human response of faith and love, from which will flow a Christian life lived in freedom and hope.

This commentary brings out these positive emphases in Galatians and Romans, while also remaining sensitive to the part these letters have played in divisions between Protestants and Catholics, on the one hand, and Christian caricature of Judaism, on the other. The aim is to clarify and shed light where Paul can be obscure as well as to bring out the full riches of his powerful presentation of the Good News for the life of believers today.

Brendan Byrne, SJ, is professor of New Testament at Jesuit Theological College, Parkville, Victoria, Australia. A member of the Pontifical Biblical Commission (1990 - 96) and Fellow of the Australian Academy of the Humanities (2000 -), he is editor in chief of the theological journal Pacifica. Byrne is the author of numerous books, including Romans in the Sacra Pagina series and a three-volume commentary on the Synoptic Gospels (Liturgical Press). He is currently preparing a similar commentary on the Gospel of John.

Byrne's lucid and accessible commentary brings a fresh and thoughtful perspective to both of these key Christian texts.
The Bible Today

Brendan Byrne has written a remarkably clear and persuasive interpretation of Galatians and Romans, two of Paul's most influential and controversial letters. He brings out both the similarities and the very real differences between the two letters and points to their significance for the latter church. I found his interpretations always insightful and helpful. He has done all of this in a way that is both well argued and easily accessible to a wider audience.
Thomas H. Tobin, SJ
Professor of Theology
Loyola University Chicago

Galatians and Romans have challenged and nurtured readers of Scripture for generations. To those who are familiar with Brendan Byrne's work, it will come as no surprise to find here an informed and informative guide to Paul's most challenging letters.
Beverly Roberts Gaventa
Helen H.P. Manson Professor of New Testament Literature and Exegesis
Princeton Theological Seminary, New Jersey

Brendan Byrne brings wide learning, passion for Paul, and skill as a teacher to two of the most important documents in the Christian Bible. His clear and concise expositions can open these sometimes difficult Pauline texts to beginners in exegesis and theology, and provide a model of engaged and effective pedagogy. His glossary alone is one of the best introductions to Paul's theology that I know.
Daniel J. Harrington, SJ
Professor of New Testament
Boston College School of Theology and Ministry