A Response to the Critics 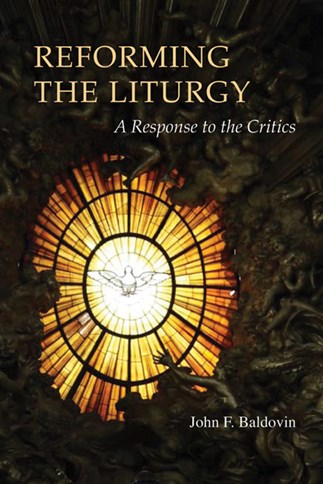 Perhaps no liturgical scholar of our time is better able than John Baldovin to write with clarity and accuracy about the meaning of the church's liturgy and the history of its development in the last half century. In this summary volume on the reform of the liturgy since the Second Vatican Council, Baldovin pinpoints and assesses’both sympathetically and critically’the objections to changes in the liturgy since the council, focusing on philosophical, historical-critical, and theological questions. After addressing each criticism in turn, in a final chapter he assesses the critique of post 'Vatican II liturgy as a whole, affirming what is accurate and necessary, rejecting what is backward looking, and proposing a set of principles to guide future development. No one who studies or participates in liturgical action in the twenty-first century can afford to overlook this book.

John F. Baldovin, SJ, is professor of historical and liturgical theology at Boston College School of Theology and Ministry. His most recent books include Bread of Life, Cup of Salvation and The Urban Character of Christian Worship.

This is an insightful book, well documented, and well thought out. The author truly has provided a service to the wider community, by showing the origins of so many contemporary criticisms and by giving a sound response. I would commend this book to any pastor or anyone involved in the restoration of liturgy in parishes.
Parish Liturgy

. . . a fascinating book, and one that is well worth reading.
Commonweal

The book deserves high praise for Baldovin's perspicacity, his commitment to rigorous academic veracity, and his intrepidness.
Anglican Theological Review

Anyone concerned with liturgical reform ought to listen to the critics and not become too comfortable. Baldovin helps us listen to their voices and continue the work of reform thoughtfully and with clear purpose.
Catholic Books Review

Baldovin's work is to be highly recommended. Indeed, any serious future discussion of pastoral liturgical issues will be unable to ignore this excellent analysis of the liturgical status quo.
Irish Theological Quarterly

By engaging rather than ignoring his critics, the author is more than capable of identifying the successes and limitations of the post-conciliar liturgical reform. The end result is an honest and insightful reflection on the need for further reform-an objective sincerely shared by all those engaged in the renewal of liturgical worship.
Studia Canonica

In this fine volume, John F. Baldovin has done us a great service. . . . This is a book to read carefully, spend time with, and discuss with colleagues!
Pastoral Music

This volume is an important contribution . . .
Emmanuel

Baldovin's is an invaluable and lucid analysis. It brings together a great variety of critics and criticisms in a unique way. He exposes the agendas which often lie close to the surface even in some of the most academically rooted critiques. For these reasons this book is of immense benefit to scholars and practitioners alike. . . . Here is a response to the critics by an outstanding scholar. Perhaps it challenges others to engage further with the most compelling critics as liturgical development continues in this new millennium.
Anaphora

John Baldovin's book is a must-read for anyone who is interested in the process of and the prospects for the ongoing reform of the liturgy.
Sewanee Theological Review

Similar to a good mystery novel, Baldovin's newest contribution to both academic and pastoral liturgy is a page-turner. I began reading and couldn't put it down-this is one of the most interesting and insightful books I've read in a long time. Baldovin presents two or more sides of many contentious liturgical issues, among them faithfulness to tradition and the liturgical vision of Vatican II; entertainment vs. christocentric models of celebration; translation, vernacular, and inclusive language; placement of altar and tabernacle and orientation of the presider-celebrant; and liturgical music. His chapter on the theology of Pope Benedict XVI is superb. Writing in his usual studious but conversational style, Baldovin gives us much to think about and challenges us to listen to all sides.
Joyce Ann Zimmerman, CPPS, Director, Institute for Liturgical Ministry, Dayton, Ohio