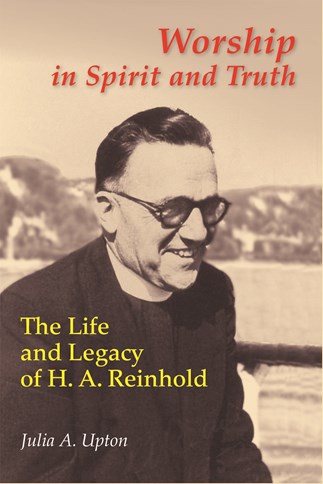 Worship in Spirit and Truth

The Life and Legacy of H. A. Reinhold
Julia Upton, RSM

Following the death of H. A. Reinhold in 1968, Godfrey Diekmann referred to him as a "liturgical prophet." Diekmann, a liturgical giant in his own right, called on others to follow in Reinhold's steps and "take up his mantle in the thorny task" of pastorally implementing the liturgical changes brought about by the Second Vatican Council. Over forty years later, that task remains every bit the challenge it was in Reinhold's day. As cries for social justice resound, liturgy more than ever must be the tie of relevance that binds the church to the world. It is this essential link’between liturgy and social justice’that Julia Upton discovered in Reinhold and that she wonderfully retrieves in tracing his life and legacy. In doing so, she takes up H. A. Reinhold’s prophetic mantle and inspires us to do so as well.

Julia Upton, RSM, is a member of the Institute of the Sisters of Mercy of the Americas. She holds a doctorate in theology from Fordham University and is professor in the Department of Theology and Religious Studies at St. John’s University (NY), where she currently serves as university provost.

Every researcher is part detective and part critical observer in search of the truth about her subject. Julia Upton belongs to the elite class of the profession. Not only has she written a compelling biography honoring Hans Ansgar Reinhold, OBL.S.B., one of the major international pioneers of the liturgical movement, but she did so by following leads that enabled her to uncover intrigue, mystery, suspense, church politics, and conflict that factored into Reinhold's life. She shares that drama with us in this riveting book.
Worship


Julia Upton has done us all a huge service by documenting the bold and courageous life and work of H. A. Reinhold. Her passionate and affectionate tale of Reinhold's efforts is a sober but encouraging reminder that the liturgical reforms imagined by the pioneers are not yet fully realized. Specifically, for those interested in religious architecture, this book will fire up a new enthusiasm for shaping spaces that empower and embrace the assembly in the celebration of its own mystery. It's a matter of justice.
Richard S. Vosko, PhD, Hon AIA
Sacred space planner for Jewish and Christian congregations


. . . an important read for anyone wishing to get a handle on the breadth of the liturgical movement. It is a contribution to the ongoing discussion today about whether the revised liturgy of Vatican II is an organic continuation of centuries of liturgical celebrations. But perhaps the greatest value of the book is that Reinhold picked up on the singular contribution of liturgical scholars and pastors in this country; that liturgy is to be lived.
Liturgical Ministry


With a contagious enthusiasm Julia Upton introduces her reader to the life and legacy of H. A. Reinhold, 1897-1968, a giant of the liturgical movement. The opening chapters trace the contours of Reinhold's life story and the middle chapters develop the key themes of his liturgical insights, but it is the last chapter which is most thought-provoking. Using Reinhold's words and ideas, Upton offers seven challenges for the on-going renewal of the Church's worship: begin with the basics; foster active participation; collaborate!; read broadly and deeply; make room for mystagogy; shape a space for worship and devotion; and run while you have the light-such a simple agenda, but potentially transformative of the Church's worship.
Kathleen Hughes, RSCJ
Author of Finding Voice to Give God Praise: Essays in the Many Languages of the Liturgy