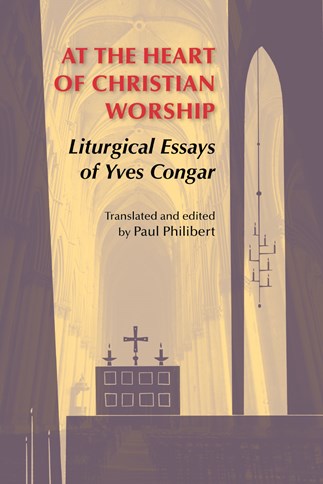 At the Heart of Christian Worship

Cardinal Yves Congar is universally known and respected as the great ecclesiologist of Vatican II whose seminal ideas helped to reconfigure the landscape of Catholic theology following the council. Less well known is his role in contributing far-reaching insights to the emerging liturgical movement in the church. This collection represents several of Congar's decisive contributions. Reading them makes possible a deeper and more cogent reception of the key ideas of the council documents. These texts are at once both erudite and exciting, both essential and pastorally incisive. There has never been a better time to disseminate these critically important liturgical insights than the present moment.

Cardinal Yves Congar, OP, who died in 1995, was a French Dominican widely recognized as one of the most important Roman Catholic theologians of the twentieth century and a major influence upon the theology of the documents of Vatican II. Congar drew from biblical, patristic, and medieval sources to revitalize the discipline of contemporary theology. He was an early advocate of ecumenism and also contributed to shaping the theological agenda of the twentieth-century liturgical movement.

Paul Philibert, OP, is a retired professor of pastoral theology who has taught in the United States and abroad. He is a Dominican friar of the US Southern Province. His 2005 Liturgical Press book, The Priesthood of the Faithful: Key to a Living Church, reflects the theology of these essays of Cardinal Yves Congar. His translation of Congar’s masterpiece, True and False Reform in the Church, will soon be published by Liturgical Press.

For the liturgical scholar, these essays provide a critical apparatus and wealth of resources that cluster around the time-tried themes of liturgical participation and the relationship of liturgy and life. Something for everyone-that's exactly what liturgy does. That's exactly what Paul Philibert has given us in this fine volume.
Liturgical Ministry


We are great to Paul Philibert for this jewel of an introduction to Congar's liturgical theology, so readable that this writer kept forgetting it was a translation. If you want to recapture the ecclesiological vision of Vatican II that reshaped Roman Catholic worship, read this book.
Edward Foley, New Theology Review


These essays combine immense erudition with arguments that are accessible to the non-specialist. They offer a rare combination of passion and precision, and they are at least as relevant today as when they were first published.
Timothy Radcliffe, OP, Author of What Is the Point of Being a Christian? and Why Go to Church?: The Drama of the Eucharist


Philibert's `translator's observation' is right on: Congar's challenges `are as fresh today as they were sixty years ago' (1) That is as true for this small volume of five essays-as it might be of the more than 1700 entries listed in his prolific personal bibliography!
Worship


The mention of Yves Congar's name does not immediately bring to mind liturgy. Yet, these essays translated from French originals is another reminder of the breadth of this theologian's research that has had far-reaching significance for ecclesiology, pneumatology, patristics, sacramental theology, the role of the laity, the nature of reform, ecumenism and much else besides. These essays remind one to include liturgy or at least liturgical theology.
Catholic Studies


The essays translated here are a treasure trove of theological reflection linking liturgy to ecclesiology. They are as fresh today as they were when Congar first wrote them. We are in Paul Philibert's debt.
John F. Baldovin, SJ, Professor of Historical & Liturgical Theology, Boston College School of Theology and Ministry


Congar's writings remain salutary antidotes to the creeping gap between liturgy and life that threatens each parish today. This book of essays would be appropriate for parish and diocesan groups seeking to link their own ministry to the liturgical life of the Church.
Church Life


What a gift to the Church by translator and editor, Paul Philibert, as he makes these essays of Yves Congar available in English! The essays gathered here, although written decades ago, are totally applicable today as the Church continues to grapple with a key principle of the Second Vatican Council's teaching that the whole local community of faith is the subject or agent of worship. Philibert gives us both accurate and readable translations of Congar's French while also providing us with sound hermeneutical principles of interpretation in his brilliant Introduction and Conclusion sections. We owe him a great debt of thanks!
Gerard Austin, OP, Rice School for Pastoral Ministry, Arcadia, Florida


Congar may have written these chapters decades ago (even before the Council), but they read like they were written for us today. They are relevant, timely, and challenging for us now because they call us to be church, to exercise our common priesthood, to live what we celebrate.
Joyce Ann Zimmerman, CPPS, PhD, STD, Director of the Institute for Liturgical Ministry, Dayton, Ohio


An exceptional tool for current efforts to understand the conciliar documents accurately. One does not need a scholarly bent to grasp the ideas presented.
Pastoral Music