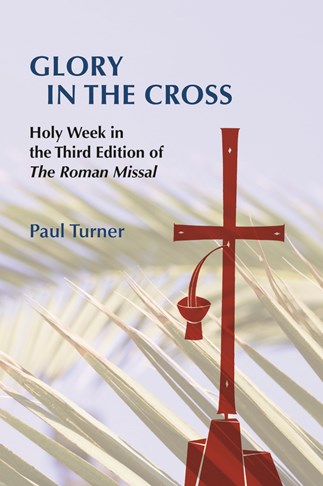 Glory in the Cross

The principal liturgies of Holy Week underwent a series of revisions between 1951 and 2011. In this book, noted liturgist Paul Turner charts the rubrics and prayers of the current rites paragraph by paragraph, explaining the historical development of individual components, how and why the post-Vatican II liturgical reform made its revisions, and where the Roman Missal, Third Edition has added nuances. This book will help ministers, liturgists, catechists, and all the faithful enter more deeply into the mystery of the cross of Christ, their glory and their hope.

Paul Turner is a priest of the Diocese of Kansas City-St. Joseph, where he serves as pastor of St. Munchin Catholic Church in Cameron, Missouri. He holds a doctorate in sacred theology from the University of Sant' Anselmo in Rome and has served as a facilitator for the International Commission on English in the Liturgy. His books include Let Us Pray: A Guide to the Rubrics of Sunday Mass (Liturgical Press, 2006).

Paul Turner helps us to `get it right' during Holy Week. But he also does so much more: he comments on the prayer texts of Masses for this special week, offers a theological interpretation of the shape of the rites, situates texts in their historical context, provides pastoral explanation drawing from his own vast experience as pastor and teacher, and takes seriously the reality that there are many different types of liturgical communities and that legitimate adaptations can and must be made to meet their needs. Sometimes this book reads like Pius Parsch's The Church's Year of Grace. Sometimes it reads like the General Instruction for the Roman Missal. Sometimes it reads like Jungmann's The Mass of the Roman Rite. Always it reads with utmost honesty, insight, common sense, thoroughness, and grace.
Joyce Ann Zimmerman, C.PP.S., Director, Institute for Liturgical Ministry


This book is packed with information and deserves to be read more than once, perhaps every year. It is the most up to date, comprehensive, and perceptive treatment of Holy Week between two covers.
Patrick Regan, OSB, Worship


Before preparing for Holy Week, buy, read, and share this book with your liturgy team. You will enjoy this treasure that graciously unpacks the sacred mysteries of these liturgies of Holy Week.
Fr. John Thomas Lane, SSS, Emmanuel: Eucharistic Spirituality


This book deserves a wide readership: liturgists, music directors, liturgy committees, priests, deacons, and all who have a substantial role in preparing some of the most beautiful liturgies during the liturgical year. Of course, it would be hard to imagine this work not becoming required reading in seminaries and schools of theology training future leaders of liturgy for parish life.
Pastoral Liturgy


Glory in the Cross is a splendid book. This book deserves a wide readership: liturgists, music directors, liturgy committees, priests, deacons, and all who have a substantial role in preparing some of the most beautiful liturgies during the liturgical year.
Pastoral Liturgy


As always, Paul Turner has presented us with a book that demonstrates great breadth and depth of research and scholarship. Glory in the Cross is a text that will be wonderfully useful to pastoral ministers in both parish and diocesan liturgical and catechetical ministry. It will even serve well as one of the texts for use in teaching the Liturgical Year in seminaries and in diaconate formation, as well as in undergraduate and graduate liturgical programs.
Stephen F. Obarski, Director, Office Of Worship and Christian Initiation, Diocese of Camden


Known for his ability in guiding priests, liturgists, catechists, and the faithful to a deeper love for liturgy and its rites, Father Paul Turner, a presbyter of the Diocese of Kansas City-Saint Joseph, has again provided another outstanding resource, this time for Holy Week. . . . Turner adheres to his "no nonsense approach" of clearly presenting the Roman Missal, and he captures its noble simplicity quite well. . . . Before preparing for Holy Week, buy, read, and share this book with your liturgy team. You will enjoy this treasure that graciously unpacks the sacred mysteries of these liturgies of Holy Week.
Father John Thomas Lane, SSS, Saint Paschal Baylon Church, Highland Heights, Ohio, Emmanuel