On the Intersection of Liturgical History and Pastoral Practice

Edited by David A. Pitt, Stefanos Alexopoulos, and Christian McConnell 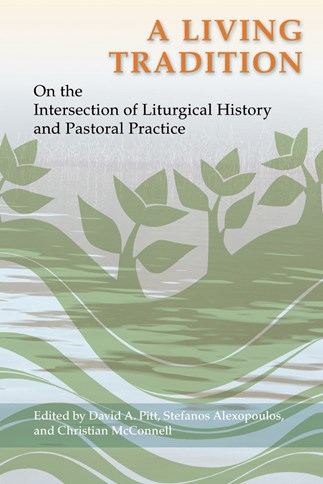 Maxwell Johnson has made multiple contributions to our understanding of liturgical history and liturgical theology. This volume honors his work by offering a set of important essays by respected scholars that bridge the distance between scholarship and praxis, to be accessible and relevant to both pastoral ministers and academic theologians.

It is organized according to three categories: liturgical year, Christian initiation, and Eucharist. Within these categories, the contributors are especially attentive to three important aspects of liturgical history:

Ultimately, the book pays tribute to Johnson's contributions to the life of the church by exploring ways that the study of liturgical history might help the church remain faithful to God and to the sacramental worldview that continues to define and characterize classic Christianity.

David A. Pitt is associate professor of liturgical and sacramental theology at Loras College in Dubuque, Iowa. He also serves as organist for St. John's Episcopal Church, Dubuque.

"As a whole, this collection of essays embodies the goal of Johnson's theological endeavor to affirm that the dichotomy between `historical' liturgical studies and `practical' application of liturgy is false. As such, this work is highly recommended to those who are not only curious about the current state of historical liturgical studies but also to those who may be skeptical of the logicality of the marriage between the historiographical and the pragmatic elements of ecclesial practices."
Charles Meeks, Religion and Theology

[This is a] magnificent volume of equally outstanding essays. Instead of digging in the liturgical past as nostalgic antiquarians intent on restoring authenticity and purity, the contributors have ingeniously focused on three main categories-liturgical year, Christian initiation, and Eucharist-and used three innovative approaches that address primarily the pastoral role of liturgical history. In so doing, they have produced an extraordinary work of scholarship, which not only does justice to the research of one of the most prominent liturgical historians living today, but to the field as a whole.
Nathan D. Mitchell, University of Notre Dame

For students and colleagues to present essays to a professor is already a great honor, but for the essays to be both scholarly and pastoral is a tribute to the person of Maxwell Johnson who has consistently demonstrated that sound historical scholarship is the best approach to good pastoral praxis.
Michael Driscoll, Co-Director of the Master in Sacred Music Program, University of Notre Dame

While it is from a Catholic press, this book is very useful for those in non-Catholic denominations that are strong in liturgical traditions as well. It gives a history of the Liturgy and how we can relate to it in today's churches. As a pastor, I found this an interesting and helpful read.
Rev. John C., Reading Room Book Reviews

These essays demonstrate the pastoral relevance of careful historical investigation of liturgy while avoiding the romantic approach to history that characterized liturgical renewal in the twentieth century. Both academic specialists and working pastors will find much here to consider. The collection demonstrates the cutting edge of liturgical studies in the twenty-first century, and it is a fitting tribute to a scholar who himself has left an indelible mark on the field.
L. Edward Phillips, Associate Professor of Worship and Liturgical Theology, Candler School of Theology, Emory University