Marcel Breuer and a Committee of Twelve Plan a Church 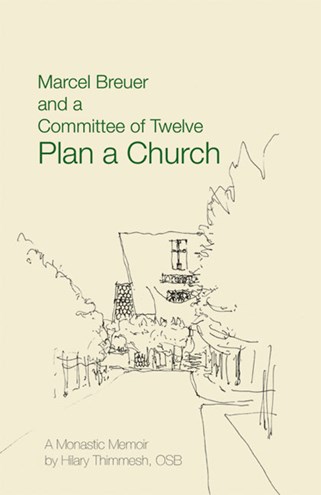 Internationally renowned architect I. M. Pei commented that if Marcel Breuer’s church for Saint John’s Abbey had been built in New York instead of the north woods of Minnesota it would be world famous. Hamilton Smith, Breuer’s longtime associate, wrote that the completed church was that rare thing, an architectural design fully realized, and he regarded it as Breuer’s finest achievement. The junior member of the twelve-monk planning committee recounts in warm and frequently humorous detail how its members related to the Hungarian-born Bauhaus-trained architect who had no background in church architecture but shared their belief in the enduring quality of simple materials sympathetically used. How the strong architect-client relationship survived the strain of disagreement at a critical moment in completion of the church is the narrative high point in this informal record of four years in which the reader sees a masterpiece of modern church architecture take shape.

Hilary Donald Thimmesh, OSB, is a native Minnesotan who became a monk of Saint John’s Abbey in 1947. He was ordained priest in 1954, gained a doctorate in English from Cornell University in 1963, and taught courses in Chaucer and Shakespeare intermittently with administrative appointments until 2009. He currently heads the Benedictine Institute of Saint John’s University.

This first-hand account of the inner workings of a building committee responsible for one of the key Catholic churches of the twentieth-century is a rare and special treat. Father Thimmesh has given us a new understanding of what it means to be an enlightened and knowledgeable patron. I commend him for his even-handed presentation of events surrounding this commission, both the good and the difficult. His discussion of the great northern stained glass wall is critical in its insight about client and architect privilege.
Dr. Victoria M. Young, Associate Professor of Modern Architectural History, University of St. Thomas

The genesis of one of the most important church buildings of the twentieth century, the soaring concrete abbey church at St. John's University in Collegeville, is recounted with clarity and wit.
Minnesota History

This book offers a first-hand description of the design and construction of the Marcel Breuer-designed church at St. John's Abbey, written by a monk and a member of the original building committee. This meeting-by-meeting account of the process conveys the complexities faced by both the architect and the client. And it shows how virtues like prudence, courage, fairness and faith all played a part in realizing what became of one of the most important churches of the 20th century.
Thomas Fisher, Dean, College of Design, University of Minnesota

How does someone review a memoir? Perhaps by the evident quality of the narrative constructed from old committee minutes. Perhaps by the church building that resulted from the process the narrative documents. Perhaps by attending to the unflagging courage of the actors, who punted only occasionally. Read this memoir. It measures up on all counts.
Mary Collins, OSB, American Benedictine Review

An intriguing insider account of the creation of one of the great monuments of modern architecture in Minnesota. Father Hilary Thimmesh's memoir, enhanced by shrewd observation and gentle wit, opens a window into the process by which a committee of monks worked with architect Marcel Breuer to design and build the now famous church at St. John's Abbey. The committee and Breuer did not always find themselves in perfect harmony-the making of masterpieces is rarely accomplished without conflict and controversy-but the results at St. John's speak to just how well the process ultimately worked. Admirers of the church and anyone interested in the relationship between architect and client will enjoy this book.
Larry Millett

There's this about great architecture: once it's there, it's hard to imagine it once wasn't. Hilary Thimmesh takes us on the winding, fraught, sometimes wild and sometimes sublime ride from when Saint John's Abbey Church wasn't to when it staked its claim as arguably the most significant American ecclesiastical building of the 20th century. Marcel Breuer put it succinctly: 'In architecture, you buy something that doesn't yet exist.' Thimmesh, with stylistic flair and impish wit, draws on his notes as secretary of the planning committee more than half a century ago to take us into the midst of a dozen monks who demonstrated through sixty meetings over four years the truth of Saint Benedict's observation about the 'variety of temperaments' in the monastery.
Patrick Henry, Retired executive director, Collegeville Institute for Ecumenical and Cultural Research