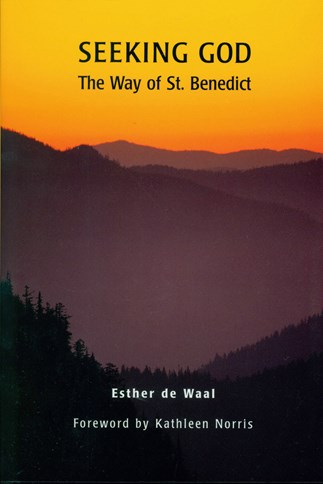 For over fifteen hundred years St. Benedict's Rule has been a source of guidance, support, inspiration, challenge, comfort and discomfort for men and women. It has helped both those living under monastic vows and those living outside the cloister in all the mess and muddle of ordinary, busy lives in the world. Esther de Waal's Seeking God serves as an introduction to this life-giving way and encourages people to discover for themselves the gift that St. Benedict can bring to individuals, to the Church, and to the world, now and in the years to come.

Through this definitive classic Esther de Waal has become known as an authority for the lay person on the Rule of St. Benedict. Her ability to communicate clearly the principal values of the Rule when applied to lay people is the ultimate strength of this book. She follows each chapter with a page or two of thoughts and prayers, contributing to its meditative quality.

Esther de Waal is an Anglican lay woman, married with four sons and a number of grandchildren. She lives on the Welsh Borders where she grew up and spends her time gardening, writing, traveling, and taking retreats. She became interested in Benedictine monasticism as a result of living for ten years in Canterbury and has written several books on the Rule of St. Benedict including A Life-Giving Way, published by The Liturgical Press, 1995. She holds a PhD. from Cambridge and was given an honorary doctorate from St. John's University for her contribution to Benedictine studies and for her ecumenical work. She was awarded the Templeton Prize for having started the Benedictine Experience weeks which are now widely held throughout America and England.

As for the Rule itself, while it had attracted me from the beginning, I needed considerable help in interpreting it. I found that Esther de Waal's Seeking God was especially useful as it opened the way for me to see the Benedictine spirituality as accessible to lay people as well as monastics. The book helped me to decide to become an oblate.
Kathleen Norris, American Benedictine Review


This present edition of Esther de Waal's informative and insightful book, already acclaimed as a best-selling spiritual classic since its first publication in 1984, will continue to engage readers in ways of appropriating for their own lives the inestimable spiritual values of Benedict's sixth-century Rule. The book is enhanced by the addition of a supportive foreword by Kathleen Norris, and the author's evocative preface and updated, expanded annotated list of readings. The book has no equal as a challenging and practical guide for monastic and non-monastic alike who are searching for ways of incorporating the basic Christian Gospel values into their daily lived-out experiences.
Rosemary Rader, O.S.B., Benedict Distinguished Visiting Professor, Carleton College


Esther de Waal was one of the pioneers in applying Benedictine spirituality to life outside of monasteries. Since she wrote Seeking God there has been a deluge of popular interpretations of Benedictine life, prompted in large part by her work. Though the pool of resources has grown mightily in the last twenty years, I still regard Seeking God as one of the very best introductions for those seeking, as she does, to bring Benedict's wisdom into the concrete experiences of daily life.
Fr. Columba Stewart, O.S.B., Professor of Theology, Curator of Research Collections, St. John's Abbey and University, Collegeville, Minnesota


The author's limpid prose is a joy to read. She draws out of the Rule each of the crucial elements in Benedict's teaching: the use of Scripture in the practice of the lectio divina is set out in its four stages and the three vows are also elucidated and their implications outlined.
Stephen Platten, Norwich Cathedral, England