A Turning to God 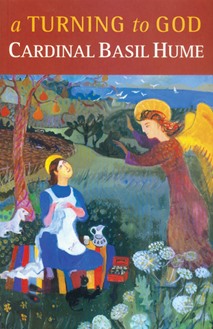 The title comes from Cardinal Hume’s homily for Ash Wednesday 1977 and is a theme that reappears frequently in his writing and preaching, particularly in his Lenten addresses.

This selection of previously unpublished material by Basil Hume takes the reader through Lent, from Ash Wednesday to Easter Sunday, with a reading for each day, a reading from the Lectionary and a prayer based on the liturgical texts.

Cardinal George Basil Hume (1923-1999) was Abbot of Ampleforth from 1963 until his appointment as Archbishop of Westminster in 1976; he remained Cardinal Archbishop of Westminster until his death from cancer in June 1999, when he was widely mourned both nationally and internationally. His books included Mystery of the Cross, Mystery of the Incarnation and Basil in Blunderland.

The texts have been edited by Patricia Hardcastle Kelly, who worked in medical publishing as the Press Office of the Bishops’ Conference of England and Wales.

This book gives us an insight into the prayerfulness and spirituality of Cardinal Hume. It assures us with simplicity but depth of understanding that God is close to us in all that we do.
The Furrow

For those of us who are trying to pray, this short volume from Liturgical Press could serve as a valuable tool for a quiet daily Lenten reflection.
Emmanuel