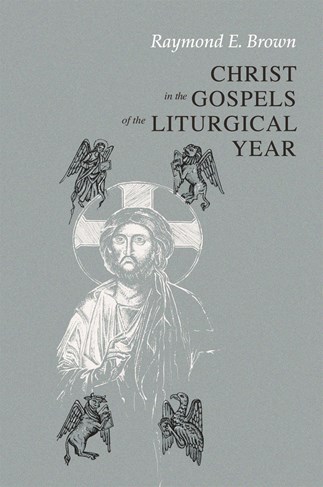 Christ in the Gospels of the Liturgical Year

A decade after the untimely death of renowned Scripture scholar Father Raymond E. Brown, SS, he continues to inspire and inform scholars and preachers, students and pastoral ministers, lay and ordained. It was only days after Father Brown’s death that his final book was published by Liturgical Press. That book, Christ in the Gospels of the Ordinary Sundays, completed his six-volume series on preaching the Scriptures, a series that had begun in the mid-1970s with the publication of his popular An Adult Christ at Christmas. Those six volumes are collected here in one convenient commemorative edition to mark the tenth anniversary of Brown’s death. Brown’s work is left largely untouched, and readers will find that his wisdom is lasting. Yet Brown, being a scholar’s scholar, would recognize the need for some enhancement in a work being republished some thirty years after the first volume appeared. Appropriately, then, this edition contains introductory essays by Brown’s colleagues and friends John R. Donahue, SJ, and Ronald D. Witherup, SS, as well as useful indexes and a bibliography of resources for preaching the word of God in the context of the lectionary.

As Witherup notes in his preface, Brown had the rare capacity to simplify complex biblical studies in a manner that did not 'dumb down’ the material but allowed it to be understood by a wide audience. . . . He did this in a fashion that was both inspiring and educational. That very broad audience ’those who grew up with Brown, so to speak, as well as a whole new generation of readers and preachers of the word' will find this book to be a source of inspiration and knowledge that they will turn to again and again.

Raymond E. Brown, S.S., (1928 -1998) was the Auburn Distinguished Professor of Biblical Studies at Union Theological Seminary in New York City. He was author of some forty books on the Bible and past president of three of the most important biblical societies in the world. By appointment of two popes (Paul VI in 1972, John Paul II in 1996) Brown was a member of the Roman Pontifical Biblical Commission. Time magazine called him probably the premier Catholic Scripture scholar of the U.S.

What a wonderful idea to bring together in one volume some of Raymond Brown's most personal, practical, and pastoral writings! While widely recognized as one of the greatest biblical scholars of the 20th century, Brown the priest and teacher always sought to make his research accessible to the general public. Even ten years after his death, Brown continues to exercise his role as minister of the Word through publications like this one.
Daniel J. Harrington, SJ, Professor of New Testament, Boston College School of Theology and Ministry


The writings of Raymond Brown never disappoint. His scholarship was always at the service of the Church, the people of God, and always looking to the ultimate spiritual benefit of believers. Now, with the help of his friends, he gives us a belated gift as this rich collection of interpretative essays is made easily accessible for Bible readers and preachers.
Abbot Jerome Kodell, Subiaco Abbey, Arkansas


Raymond Brown speaks with a monumental assurance, the fruit not merely of his knowledge of the texts but also of his life of faith. His book contains many insights of startling simplicity into the original meaning of those texts, as well as into the church's situation today. Many who think that they know the scriptures well will find themselves enriched by observations from this eminent, and much-lamented, scholar that will not have occurred to them. There is a profound wisdom here that comes from decades of living in and with the text of the Jewish and Christian Scriptures.
The Way


Ronald Witherup and John Donahue, both priests and distinguished New Testament scholars themselves, together with Liturgical Press, have given us a great gift. By collecting and re-introducing Raymond Brown's slim volumes of extraordinarily clear, insightful treatments of the gospel texts for preaching, they are permitting both seasoned and younger preachers open access to a goldmine. We are all in their debt.
Michael J. Gorman, Professor of Sacred Scripture and Dean, The Ecumenical Institute of Theology, St. Mary's Seminary & University, Baltimore, Maryland


An ultimate compendium of Brown's work through the years.
Midwest Book Review


The individual chapters are very helpful if read during the appropriate liturgical season. The volume is highly recommended for home purchase as well as for parish, college, and religious house libraries.
Catholic Library World


This is indeed a fitting tribute to the enduring contribution of a great Catholic biblical scholar and teacher.
The Bible Today


This new edition makes Brown's treasured work accessible to a new generation of preachers. Not only does Brown provide invaluable insights for understanding the Gospels and Acts of the Apostles, but with the additional essays by Donahue and Witherup, the preacher is able to learn even more clearly Brown's exemplary method of moving from the biblical text to contemporary interpretation in a liturgical context.
Barbara E. Reid, OP, PhD, Professor of New Testament Studies, Catholic Theological Union


This is a magnificent book. Every preacher should own and read it. The treatment of Matthew's genealogy alone is worth the price of the book. The reader will find here the fruit of the mature thought of one of the best New Testament scholars of our time. Learned without being pedantic, insightful without being dry, the material presented here illumines both individual passages and whole Gospels. The person looking for `canned' sermons will have to look elsewhere; but the person serious about solid preaching will find here material to induce the kind of reflection on the text that eventuates in good, solid biblical preaching. It is a volume highly to be recommended, both for understanding Scripture and for effective preaching.
Paul J. Achtemeier, Jackson Professor Emeritus of Biblical Interpretation, Union Theological Seminary, Virginia


This book provides a wonderful introduction to Gospel exegesis for laity and is an invaluable tool for those whose task it is to break open the Word of God Sunday after Sunday to sometimes very diverse audiences.
Prairie Messenger


My only wish is that the book had been issued in hardcover to better withstand the repeated use it will surely be put to for teaching and preaching.
Trinity Seminary Review


Fr. Raymond Brown's Christ in the Gospels of the Liturgical Year fills a significant void in Catholic publishing: a book that integrates study, spirituality, and applications in an accessible manner. Its issuance as a handy compendium is particularly timely given the Synod on Scripture and the growing prominence of lectio divina. Christ in the Gospels of the Liturgical Year makes an excellent companion to the liturgy of the hours or daily and Sunday missals. This compelling title is enjoyable as well as informative and inspiring, thereby keeping the pages turning. A fitting testimony to the enduring nature of Fr. Brown's work.
Karl A. Schultz, National speaker and author of eleven books


During his long and productive career, Father Raymond Brown wrote a number of important pastoral aids for preachers. It is a joy, then, to have all of these works in a single volume that covers the span of the entire Liturgical Year. In this volume, preachers will find a treasure trove of insights about the infancy and passion narratives, the readings for the season of Easter and the Feast of Pentecost, and the Gospels during Ordinary Time. More then a commentary on individual texts, this volume provides preachers with the background necessary to understand the readings they are charged to proclaim. By assembling these writings in a single volume, Witherup and Donahue have made the voice of Raymond Brown available to yet another generation of preachers.
Frank J. Matera, The Andrews-Kelly-Ryan Professor of Biblical Studies, The Catholic University of America, Washington


This book takes time! The text demands time not for conceptual understanding. No, the text deserves time to be experienced as a collection of scholarly meditations on the person of Christ in the Sunday proclamation. One needs to `ponder these things in the heart.' Additionally, both the scholar and the preacher will benefit from reading the detailed notations. They do not distract from meditation.
Catholic Books Review