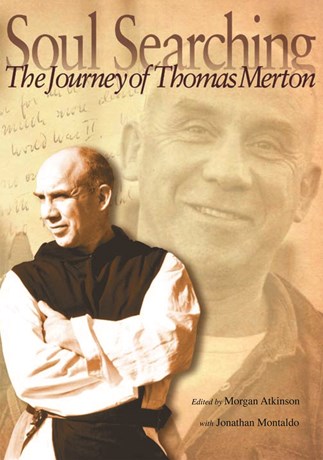 The Journey of Thomas Merton
Edited by Morgan Atkinson, with Jonathan Montaldo

The Documentary as seen on PBS.
Noted by GoogleΓäó as a best book of 2008

A companion to award-winning producer Morgan Atkinson's documentary of the same title, this work draws us into the geographical landscape of Thomas Merton’s life in America, a landscape that was intrinsic to his spiritual journey. Containing a considerable amount of rich material unused in the documentary, Soul Searching is alive with the narrative of those who either knew Merton well or passionately care about him: Father Daniel Berrigan, Rosemary Ruether, Martin Marty, Paul Elie, and many others. Their insights are linked to the places’from the Abbey of Gethsemani to the Redwoods Monastery in California, from New York City to Christ in the Desert Monastery in New Mexico’that both nurtured and shaped Merton. The picture that emerges, through both the narrative and vivid photography, is filled with provocative insights into the interior landscape of one of the spiritual giants of modern times.

Morgan Atkinson has worked as a communications professional since 1975. In 1985 he established Duckworks, Inc., a production company that creates independent and commissioned work. A resident of Louisville, Kentucky, Atkinson's primary focus is programming that examines issues of community and culture. He has had seven documentaries broadcast on KET/PBS, most recently the companion DVD to this volume.

Following the film release, Soul Searching: The Journey of Thomas Merton as a book makes a considerable contribution to Merton studies. Twenty-four well-known Merton interpreters reflect on the monk, the solitary explorer, the social critic, and the man of letters in this engaging volume, thanks to the editorial collaboration of Morgan Atkinson and Jonathan Montaldo. It can be highly recommended to all seekers of God in our troubled times.
Br. Patrick Hart, Monk of Gethsemani and Merton's last secretary


Morgan Atkinson's DVD Soul Searching: The Journey of Thomas Merton is just a preview of the more extensive interviews found in the book by the same title. As a companion to the DVD, this book engages us in perceptive and sometimes humorous insights into Merton's life and the prophetic importance of his works for the world today.Selections from Atkinson's interviews with twenty-four notable Merton scholars and friends are organized according to four phases of Merton's life and spiritual journey in a way that augments all the Merton biographies and articulates his message in the context of his, and our, everyday lives.
Robert Toth, Merton Institute for Contemplative Living, Louisville, Kentucky


In Soul Searching, the insights of two dozen Merton scholars, biographers, friends, and monastic brothers are woven together into a rich and intricate tapestry. To listen in on these marvelously articulate yet engagingly informal conversations is an education and a delight. This volume is not only a superb complement to Morgan Atkinson's acclaimed film of the same name, but a significant achievement in its own right, providing vivid testimony that makes clear why Thomas Merton's life and work continue to matter for Church and world four decades after his death.
Patrick O'Connell, Editor: The Merton Seasonal, Co-author: The Thomas Merton Encyclopedia, Editor: Merton monastic conferences series


The book of reminiscences, like the documentary, will surely awaken interest in Merton as an outstanding cultural figure and spiritual pilgrim.
Midwest Book Review


Merton speaks to each generation about prayer, social concern, interreligious dialogue, and the search for the true self. Soul Searching helps us meditate on this legacy, and may send many more people back to the books that Merton himself wrote.
Commonweal


[Y]oung and old, who are looking for a spiritual guide [are encouraged] to read this book.
Pastoral Music


Soul Searching is an excellent introduction to Merton's life and thinking. Its generous use of well-reproduced photographs, and chatty style, make it very accessible.
The Merton Journal


Soul Searching gently and clearly pulls together the wide spectrum of the facets of Merton's life as a man and a great spiritual writer of the 20th Century. The carefully crafted volume of gifted reflections of women and men who either knew him personally or through the study of his writings invite the reader to more easily understand the remarkable and often complex persona of the enduring Merton. It is a beautiful companion to the DVD, but it stands alone as a most special addition to any personal Merton library.
Anne McCormick, Trustee, Merton Legacy Trust


Thomas Merton was a highly spiritual man who gave much comfort to many people, and Soul Searching is a read for those to who want to be inspired further.
Midwest Book Review


Yes, another book on Merton! This one offers you his endless fruitfulness through some amazing inside sources, but also Morgan Atkinson's brilliance in putting it together so creatively. Read, and be broadened by the great Merton once again!
Richard Rohr, OFM, Center for Action and Contemplation, Albuquerque, New Mexico


While the book would not fit into your back pocket it would grace any prayer stool, bedside locker, glove compartment, or student desk. It is a good introduction to Merton and whets the appetite for further reading.
The Furrow