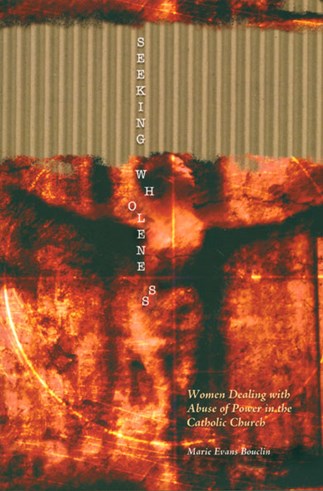 While sexual abuse of minors by clergy in the Catholic Church has received extensive news coverage, less attention has focused on adult women betrayed and sexually abused by priests. Seeking Wholeness shares the stories of women who have been abused and how the abuse has affected their lives. Marie Bouclin not only records their accounts, but provides a model of spirituality and social support aimed at promoting their physical and emotional healing.

As Bouclin recounts, even women therapists, spiritual counselors, and pastoral personnel working within the Catholic Church find themselves targets of clergy sexual abuse. Bouclin describes some of the conflicted psychological dynamics these women experience.

Critical of the current, hierarchical model of Catholic priesthood, Bouclin offers an alternative approach based on the person and mission of Jesus. She explores the power of reading Scripture and sharing personal prayer in small-group faith communities. By doing so, she shows the paths women who have been sexually abused by priests can take to healing and wholeness.

Marie Evans Bouclin lives in Sudbury, Ontario, Canada. She works as a translator in theology and ethics. She has written several articles and presented workshops on the spiritual needs of women abused by clergy.

An important contribution to the clergy sexual abuse situation. Marie combines case studies with critical feminist analysis to describe the reasons for clergy misconduct and suggest ways to overcome it. This should be on every seminary and parish's reading list.
WATERwheel


. . .gathers the expertise and testimony of the authors' experience striving to redress the physical and spiritual needs of women who have suffered betrayal and sexual abuse. . . . It emphasizes the critical importance of recognizing the problem, of allowing and encouraging women's stories to be told.
The Midwest Book Review


. . .this book presents much food for thought.
Catholic Library World


Despite much attention to sexual abuse of children by the Roman Catholic clergy, sexual and psychological abuse of adult women by the clergy has received very little attention in the press. Whereas the refusal of ordination to Catholic women is in the public consciousness, the abuse of power by the hierarchy when dealing with women working in the church is rarely discussed. Seeking Wholeness: Women Dealing with Abuse of Power in the Roman Catholic Church thus addresses a topic of enormous importance which is still far too often ignored. Marie Evans Bouclin breaks the silence. I highly recommend this very important book to anyone concerned with violence against women in religion. It is a must-read for Catholic women, bishops, counselors and the wider public.
Dr. Elisabeth Schüssler Fiorenza, Harvard University Divinity School, Cambridge, Massachusetts


This is an important book especially in the way it is grounded in women's experiences of abuse and for the way that it exposes a reality that is often hidden from our view. . . . The author courageously `speaks the truth to power' (109) regarding the Church's role in maintaining structures that make such abuse possible. She offers some helpful alternative Christian feminist theologies to women in search of other ways to think about and live their Christian faith. The latter chapters are particularly useful for practically assisting women with their healing and recovery processes.
Studies in Religion


Interwoven into her convincing argument are the stories of real women who have suffered as a result of the abuse of power. Ms. Bouclin presents an insightful look at many of the issues faced by women, specifically, and the laity, in general, in the Catholic church.
National Catholic Reporter