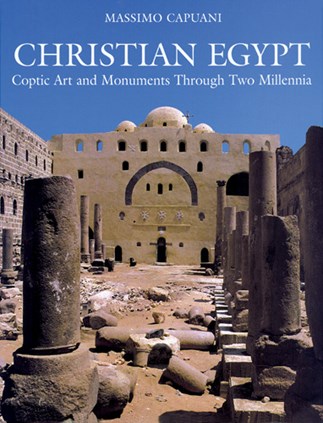 In Christian Egypt, Massimo Capuani invites students, scholars, and other interested readers to gain a greater appreciation of the richness of the Coptic civilization by traveling through ancient and medieval Coptic sites throughout Egypt, including the ruined monasteries of Saint Jeremiah (Saqqara) and Saint Apollo (Bawit).

Capuani's comprehensive examination of the archeological studies and historical literature of Coptic Christian monasteries and churches are supported by over 170 black-and-white photographs, maps, and architectural illustrations. In addition, 105 full-color photographs provide a substantive record of monuments, architectural features, and wall paintings not seen elsewhere with such clarity and beauty. A chronology of Egypt from 332 B.C. to 1952 and an essay on the typology and architectural evolution of Egyptian churches add to the value of the work.

Christian Egypt is enriched by the contribution of Otto F. A. Meinardus, who introduces readers to Coptic Egypt with a discussion of basic issues such as the patriarchs of Alexandria and theology of the World Church during the fourth and fifth centuries, the history of the Coptic Church, monasticism, the attitude of Egypt’s rulers toward the Copts, and the Coptic renaissance during the pontificates of the patriarchs Cyril VI and Shenouda III.

In a valuable, concise account, Marie-Hélène Rutschowscaya elucidates several aspects of Coptic art: wall paintings, icons, illustrated manuscripts, as well as textiles. She offers readers a comprehensive picture of the artistic achievements of the Copts. Gawdat Gabra’s thorough knowledge of current archeological activity and the most recent consensus regarding the dates and other questions concerning churches and monasteries enhance the store of information in Christian Egypt.

Areas and regions included are The Region of the Delta, Nitria and Kellia, Scetis (Wadi al-Natrun), Cairo and Its Vicinity, Al-Fayyum and the Region of Beni Suef, The Eastern Desert, The Region of al-Minya, The Region of Asyut, The Region of Sohag and Akhmim, The Thebaid, Upper Egypt, and The Oases. Includes a chronology, bibliography, glossary, and index of places.

Massimo Capuani, an engineer and researcher, is an expert in the history of the Eastern Christian Churches and has a thorough knowledge of the Middle Eastern and Mediterranean worlds; he has collected rich documentation about their cultural and artistic development.

Otto F. A. Meinardus, Fellow of the Institute of Coptic Studies in Cairo and a member of the German Archaeological Society, is a doctor of philosophy and theology and a professor at the American University in Cairo and Athens College in Greece.

Marie-Hélène Rutschowscaya is head curator of the department of Egyptian antiquities at the Louvre and director of the Coptic section; she is also a professor at the École du Louvre.

Gawdat Gabra, former director of the Coptic Museum in Cairo and member of the board of the Society of Coptic Archaeology, has a doctorate in Coptology from the University of Münster. He serves as a consultant in a number of projects of the American Research Center in Egypt and is chief editor of the Saint Mark Foundation for Coptic History Studies.

272 page Monumental work is a masterpiece of art and history of the Christian Era of Egypt.
Coptic Church Review

This is a volume of interest to the historian, artist, archaeologist and theologian. It gives an insight into modern Coptic renewal and the influence of its monastic life, as well as an overview of a key element in the development of Egyptian Christianity. Both the beauty and the struggles of this church come alive through these stories and illustrations.
United States Conference of Catholic Bishops (USCCB)

Massimo Capuani offers an enlightening overview of the history of Egypt's largest and most ancient minority community . . . and provides a superb overall orientation to the sites as well as a fine feel for visual style and major religious themes in the Coptic iconographic repertoire.
Religion and the Arts

Written in a limpid style that is both instructive and colorful, this book, rich in splendid illustrations is a thorough study of the Coptic Church: culture, art, architecture, cultic and ritual practices. Nothing escapes the eyes of the three authors: a historian of monasticism, a theologian, and the curator of Egyptian antiquities in the Louvre. The plan of the book is unusual: it is divided into geographic regions, which allows for a meticulous study of every monastery, every church, every village. Finally, by means of the history of the oldest among Christian churches, the authors shed light on the present renewal of a Coptic spirit in Egypt.
Djénane Kareh-Tager, Ecritures