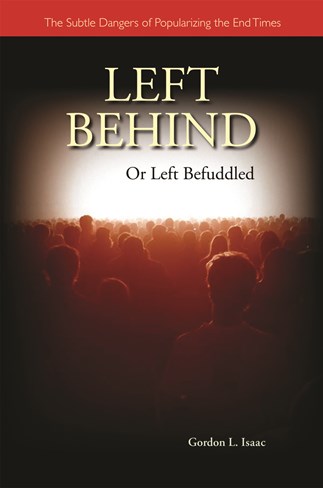 Left Behind or Left Befuddled

The Subtle Dangers of Popularizing the End Times
Gordon Isaac

The extraordinary success of the Left Behind series by Tim LaHaye and Jerry Jenkins shows that their action/adventure novels have tapped into the American psyche. It has revived our fascination with vivid images of the book of Revelation and other biblical texts: the Antichrist, the mysterious number 666, and people suddenly raptured into the sky by God. But is there something dangerous behind the thinking in these books and how they play out in our world today? In Left Behind or Left Befuddled, Gordon Isaac takes the reader inside the theology behind the series. In clear and accessible prose, Isaac answers many important questions that Christians have about the phenomenon that is Left Behind:

Gordon Isaac is the Berkshire Associate Professor of Advent Christian Studies in the church history department at Gordon-Conwell Theological Seminary in Massachusetts. He is also an ordained Advent Christian minister who has served a number of congregations.


Wow, I really liked this book and warmly recommend it to you-especially if your church needs a book like this for its library or if you want to gain perspective on the Left Behind books. . . . It presents the big issues in readable, accessible, and pleasing prose. Most of those who write about dispensational eschatology so quickly get into debatable issues and inside trader talk that the discussion becomes inaccessible. Gordon Isaac manages to avoid this problem wonderfully.
Scot McKnight, Jesuscreed.org


Fundamentalism is historically an authoritarian and simplistic reaction to the fears evoked by religious, political, social, or economic chaos. Thus, in today's turmoil of postmodernity and globalization, it is not surprising that many Christians seek security from biblical misinterpretations of the second coming of Christ. Since Gordon Isaac, unlike most critics of religious fundamentalism, incisively recognizes this, his book is essential reading for theologians and general readers alike.
Rev. Gerald A. Arbuckle, SM, PhD, Director, Refounding and Pastoral Development Unit, Catholic Theological Union, Sydney, Australia.


Those who are curious about this phenomenon or have family members or friends who are enthralled by this series will want to read this thoughtful and measured critique.
The Bible Today