History of the Liturgy 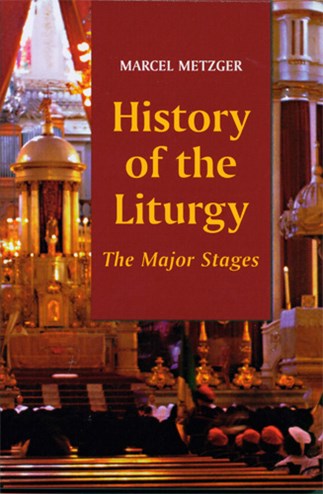 How great the differences between the Last Supper celebrated by Jesus and a pontifical High Mass at St. Peter's in Rome! And also, between the early baptisms by immersion described in the Acts of the Apostles and the baptisms of newborns in our parishes today. Why such a change in the celebration of the Christian mystery? Why the recent reforms, often misunderstood? In History of the Liturgy, Marcel Metzger answers such questions and offers an understanding of this evolution through a carefully documented historical survey.

The essential forms of the liturgy were fixed very early according to the tradition received from the apostles. But the place given to biblical readings, teaching, singing, and ritual has varied in the course of the centuries.

Metzger studies the development of the liturgical institutions and distinguishes liturgy's five main stages that correspond to the situations of the Churches in ancient, medieval, and modern societies. He begins by focusing on the apostolic period, roughly the first century of our era, until the death of the apostles. He follows by studying the period of minorities and semi-clandestiny until the beginning of the fourth century. He then focuses on the "Peace of the Church," which grants public status to the churches in the Empire, fosters their growth, and organizes the collaboration between Empire and Church. The work concludes by studying the stability, rigidity, renewals, and reforms of the Roman liturgy, from the end of the Middle Ages to Vatican II.

This clear and accurate survey of the history of liturgy is designed to awaken readers' interest, on a solid yet introductory level, in the realities that have made and still make up the Church's liturgical life: assemblies, Eucharist, baptism, reconciliation, daily praise, the Church's calendar, and its architecture.

In History of the Liturgy, Metzger stresses that if history is the teacher of life, the eyes of Christian faith allow us to recognize in it as well the mysterious presence of God, who, through the Spirit, guides his people. And this happens, above all, in the liturgy.

. . . goes to the heart of what is Liturgy and why it has developed to the point at which we celebrate it today.
The Priest