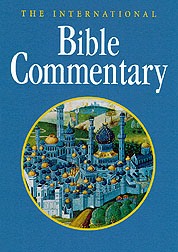 What do readers engaged in pastoral concerns want to know about the Bible? To this question men and women from many different countries, continents, and languages have collaborated to supply an answer in The International Bible Commentary (IBC)—a one-volume Bible commentary for the Church of the twenty-first century.

Initiated by international scholars as a Catholic and ecumenical, academic and pastoral enterprise, The International Bible Commentary brings together many voices speaking from different cultural perspectives to interpret God's word in the Bible. These voices, gathered from South America, Europe, Australia, Africa, North America, India, Asia, and the Philippines, have written their commentaries and articles from a variety of perspectives so that the spirit of many world cultures can be experienced in the celebration of the Bible today. A ground-breaking achievement for pastors and preachers across the globe, The International Bible Commentary enables people to read and teach the Bible by helping them to recover the ancient biblical truth in all its warmth and power, yet within modern contexts. The international strength of this work is confirmed by the participation of publishers who are committed to producing editions in English, Spanish, French, Italian, and Polish.

The International Bible Commentary meets the specific needs and requirements of pastors using a one-volume Bible commentary. In addition to articles on text and the canon of the Bible, interpretation, and biblical theology always asking "what does a pastor need to know about these subjects?" essays on contemporary issues are also included, such as Church and state, ecology and the Bible, justice, poverty, and work. Pastors' guides tie together the biblical commentaries and the general articles and focus on themes such as the Bible and preaching, the Bible and liturgy, the Bible and Christian education, the Bible and social action, and the Bible and pastoral care. The commentary takes note of each biblical book's use in the Church's liturgy.

Scholars will also be impressed by the global methodological and systematic approach of The International Bible Commentary. Using the modern historical-critical method, the commentators emulate the exegetical approaches of early Christian scholars such as Irenaeus, Tertullian, and Origen, and include information on how the texts have provided vital guidance to the Church throughout the world. The International Bible Commentary has prompted, for the first time, communication between commentary authors and other experts, who have come together to critique each other's work. This mutual enlightenment has enhanced the quality of each presentation.

The International Bible Commentary meets the needs of the general reader as well by translating the language of scientific exegesis into language that is easy to understand. Through clear prose, introductory articles, and commentary relevant to living the message of the Bible today, The International Bible Commentary anticipates the questions of the modern reader, asking "What are his or her ideas, presuppositions, and expectations?"

The International Bible Commentary's general articles treat selected questions about interpreting the Bible, while the body of the text consists of commentaries on the books of the Bible presented in the general order traditionally given those books in the first millennium of the Christian era. Each commentary has two parts: First Reading and Second Reading. The First Reading identifies the subject of the book as a whole, which is necessary for grasping the real context and sense of individual verses and chapters. The Second Reading fills out the general insight with the passionate details of poetry and preaching and history. Positioned throughout the commentaries are excursuses that clarify key words and concepts. Sixteen pages of color maps and a series of line-drawings especially prepared for this commentary highlight sites of particular importance.

The teamwork approach to The International Bible Commentary offers a sense of belonging to an international community of interpreters who take seriously their accountability to God's people in reading Scripture. Stressing that it is not enough simply to pass on the latest scholarship on a text, the contributors to The International Bible Commentary have made the statement of the scholar a life-giving word to the reader. It is because of this distinctly collaborative effort that pastors, preachers, and laypeople have in hand a means for making the Bible come alive with relevant messages for the contemporary world.

The International Bible Commentary * is the first one-volume Bible commentary created specifically for pastors and preachers world- wide
* is a Catholic and ecumenical, international resource for the Church of the twenty-first century
* includes contributors from many Christian communions and six continents, including 32 countries
* uses the modern historical-critical method
* translates the language of scientific exegesis into the language of the common reader
* includes general articles that treat selected questions about interpreting the Bible
* includes essays on contemporary issues in addition to articles on text and the canon of the Bible, interpretation, and biblical theology
* includes guides for pastors to relate the biblical commentaries and the general articles
* offers cross references to the books of the Bible
* includes concise commentaries on the books of the Bible
* clarifies how the commentary should be read
* defines key words and concepts in the Bible
* includes sixteen pages of full-color maps and a series of line-drawings especially prepared for this commentary that highlight sites of particular importance

Sean McEvenue is professor of Old Testament theology at Concordia University in Montreal, Canada. His training with the Jesuits, mostly in Toronto, introduced him to biblical scholarship and the thought of the distinguished Jesuit theologian Bernard Lonergan. He completed his biblical studies at the Pontifical Biblical Institute in Rome, writing a Doctorate in 1970 under the direction of Norbert Lohfink, SJ. His publications consist of books and articles centered on the sources of the Pentateuch, and focus on questions about truth and meaning of biblical texts. His main concern has been to exploit the clarity achieved in Lonergan's model of theological method, in order to redefine the tasks of biblical interpretation. He is the author of Interpretation and Bible, and Interpreting the Penteteuch, published by The Liturgical Press.

William R. Farmer is emeritus professor of New Testament at Perkins School of Theology, and research scholar at the University of Dallas. At Cambridge he studied with C. H. Dodd while completing a degree in philosophy of Religion and Christian Ethics. His Doctoral work at Union Theological Seminary was with John Knox. Farmer began writing on the social history of pre-70 Judaism and thereafter entered the field of synoptic studies. From 1965 to 1989 he worked closely with Albert C. Outler. His recent publications focus on the problem of Christian origins. Farmer is a Guggenheim Fellow and a Fellow of the International Institute for Gospel Studies. He was an invited Visiting Fellow at Fitzwilliam College, Cambridge, in the spring of 1995.

David Laird Dungan was born in China, the son of Presbyterian missionaries. An ordained Presbyterian minister, he serves as Lindsay Young Distinguished Professor of Humanities in the Department of Religious Studies at the University of Tennessee. He completed a degree in theology at McCormick Theological Seminary in 1962 and obtained his doctorate from Harvard Divinity School in 1967, working with Krister Stendahl and Helmut Koester. His early writings focused on the sayings of Jesus in the letters of Paul and on ancient documents relevant to study of the Gospels. He is broadly published in synoptic studies.

Armando J. Levoratti is Professor of Old Testament at the Seminario Mayor in La Plata, Argentina. He is a member of the Pontifical Biblical Commission and the editor of Revista Bíblica, the leading Latin American scholarly journal for Biblical Studies. With the assistance of his New Testament colleague Mateo Perdía he is the principle translator of the entire Bible from Hebrew and Greek published as El Libro del Pueblo de Dios, a version for the Argentinian people. He is also the editor-in-chief of Santa Biblia, an ecumenical study Bible published in 1995 by the United Bible Society and used throughout Latin America by both Protestants and Catholics. Professor Levoratti serves as one of the chief consultants of the United Bible Society.

This is a wonderful gift to the worldwide Church for the millennium. In directing itself to pastoral concerns, it recognizes the necessity of readings of and for the Church, not just the academy. As such, there is a good balance between useful historical-critical insights and overriding conviction that the Bible is Sacred Scripture which stands within a tradition of interpretation.
William T. Cavanaugh, University of St. Thomas

At last! a comprehensive commentary that brings together voices of biblical scholars from all over the world. Not only does it offer a guide to each book of the Bible, but also gives insights into contemporary concerns from diverse cultural perspectives with global implications. This new resource is a must for Catholic teachers, preachers, and scholars.
Barbara E. Reid, OP; Professor of New Testament Studies, Catholic Theological Union; New Testament Book Review Editor, Catholic Biblical Quarterly

The scholarship is of a high order and the work upholds the editors' dictum, 'the historical approach to the Bible is not only legitimate but also necessary' (p. xxiii).
Journal of Biblical Literature

Those who purchase the volume will conclude that it is one of the best buys they have ever made.
New Theology Review

Considering how comprehensive the volume is and the quality of its publication, the cost is quite low. The general articles reflect current scholarship, and they alone are worth the book's price.
Religious Studies Review

. . . is truly Roman Catholic as well as truly ecumenical and representative of a global perspective.
Biblical Theology Bulletin

. . . overall this is a fine piece of work.
Society for Old Testament Study