The Beginning of the Gospel

Introducing the Gospel According to Mark: Volume 1 (Mark 1-8:21) 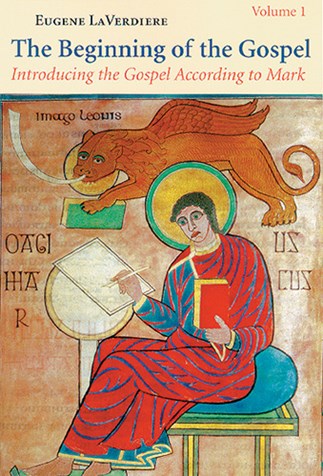 Mark was a proclaimer calling people to repentance. At a time nearly everyone felt was the end of the world, he boldly told the story of the beginning. When so many were overwhelmed by what seemed to be bad news, Mark proclaimed the story of the good news in his Gospel. Using rhetorical and literary analysis, Father LaVerdiere introduces Mark's story in The Beginning of the Gospel: Introducing the Gospel According to Mark. To aid those who prepare homilies, he shares Mark's sense of Christ's mission, the Christian calling, the universal Church, and the Church's mission in a language that everyone can understand.

Who was Mark? Where and when did he write, and for whom? What were his sources? What was his guiding intention? Instead of dealing with these introductory questions separately, Father LaVerdiere answers them while commenting on the Gospel. He explains that for Mark the gospel was not a mere record of past events, but a new act of proclamation. In content, Mark's Gospel was a story of the gospel of Jesus and his disciples. In form, however, Mark's Gospel was an act of proclamation. It made Jesus, the one who was crucified but had been raised from the dead, present to Mark's readers and listeners. Through Mark's Gospel, the gospel proclaimed by Jesus and the Church became the gospel that was Jesus.

In Volume 1 Father LaVerdiere discusses the title, the prologue, and part one: "Jesus and the Mystery of the Kingdom of God." Within these chapters he deals with questions raised about the identity and mission of Jesus and examines Mark's emphases on the mystery of the gospel (of the person of Jesus and the Kingdom of God). Father LaVerdiere also discusses the major symbols of the first part of Mark's Gospel: the sea (he thalassa) and the bread (ho artos).

The first part of the Gospel of Mark ends: "Do you still not understand?"; Reflecting on that question, Father LaVerdiere recalls the title Mark gave to his Gospel: "The beginning of the gospel of Jesus Christ [Son of God]." Throughout this commentary he keeps Mark's title in mind. After each event, he repeats the title. Taking Jesus' final question to heart, Father LaVerdiere asks, "Do we still not understand?"

Eugene LaVerdiere, SSS, PhD, is Adjunct Professor of New Testament studies at the Catholic Theological Union and the senior editor of Emmanuel magazine. He is the author and editor of numerous books including The Eucharist in the New Testament and the Early Church, A Church for All Peoples, and Luke (New Testament Message series) published by The Liturgical Press.

The work is to be especially commended for making the results of literary criticism, linguistics, and historical-critical analysis accessible to a non-specialist audience.
Religious Studies Review