The Art of Joseph O'Connell 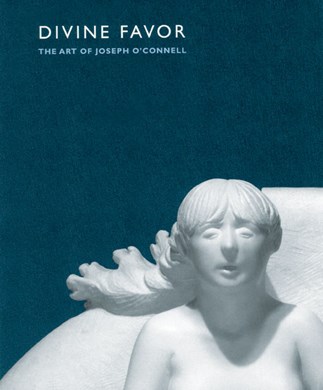 Collaborating as writers, designers, photographers, and editors, friends of Joseph O'Connell offer a glimpse of his creativity in Divine Favor, a photographic collection of this master-artist's work.

Introducing Joseph O'Connell's principal works to a broader public, Divine Favor contains photographs of his work as well as background information and reflections. Readers will find a sketch of O'Connell's life and work in the "Chronology of Principal Events in the Life and Work of Joseph O'Connell," an affectionate introduction to the life of Joe as artist and friend in J. F. Powers "Dear Joe" and a tribute to the man and artist in Garrison Keillor's "He Was in the Arts, You Know". Other writers present reflections throughout the book on their favorite works, representing the hundreds of viewers who admire a favorite print or sculpture.

Influenced as a young artist by Eric Gill's liturgical art, O'Connell produced many works inspired by religious themes. He had an unsettling ability to put familiar scriptural images, like Christ the King or Judas Iscariot, into a contemporary scene where we prefer not to see them. Working as a printmaker and sculptor of wood, metal, and stone, O'Connell developed his own visual voice, a unique style—at once representational and stylized, simple and elegant—which distinguishes his work from the work of other twentieth-century artists. He honed his skills as a sculptor, using no power tools, but only chisels and hammers like those of the master-crafters who carved stone images on the great medieval cathedrals.

Articles and reflections in Divine Favor are "Dear Joe," by J. F. Powers; "He Was in the Arts, You Know," by Garrison Keillor; "Unbecoming: A Look at 'Eve in the Baraque,'" by Mara Faulkner, OSB; "A Bead on Human Folly," by Hilary Thimmesh, OSB; "Jazz and the Coming of the Kingdom," by Mary Schaffer; "The Gift of Joe," by Rosemary Boyle Petters; "A Degree in Theology and Fine Art," by Philip Morsberger; "A Work in Progress," by Larry Schug; "The Moses Man," by Mary Willette Hughes; "Transformation of the Commonplace," by Alan Reed, OSB; "Joe's Questions," by Nancy Hynes, OSB; "The Tree of Life," by Mark Conway; "Tapping," by Dennis Frandrup, OSB; " A Meditation on Peter's Denial," by Mary Hynes-Berry; and "Chronology of Principal Events in the Life and Work of Joseph O'Connell."

. . . the originality, technical skill and expressive power of his best work deserve recognition and appreciation by a wider public.
America

Art is partnered with life and energy in Joseph O'Connell's work. His forms echo the humanity of his subjects . . . and of ourselves.
John Slorp, President, Minneapolis College of Art and Design

Divine Favor conveys a warm, simple beauty and sense of humor. If that is a measure of O'Connell himself, his friends were blessed to have known him.
The Catholic Spirit

I had never heard of Joseph O'Connell (1927-1995, the copyright page said), but by the time I had finished turning the pages, I could hardly wait to show the book to my wife, Wendy, and plan a pilgrimage to see some of O'Connell's work in person.
John Wilson, Editor, Books and Culture