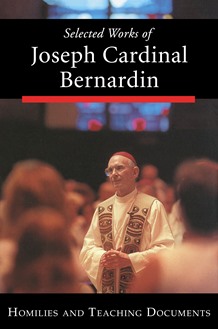 Joseph Cardinal Bernardin is widely regarded as having had more impact on the Catholic Church in the United States than any other bishop this century. By the time of his death in 1996 he had attracted the respect and affection of millions around the world. Selected Works of Joseph Cardinal Bernardin provides in two volumes the "essential" Bernardin for those interested in the faith, ecclesial vision, and pastoral insights of this great church leader.

The first volume, Homilies and Teaching Documents, captures the care and sensitivity with which Cardinal Bernardin carried out his teaching ministry as Archbishop of Chicago. It consists of his pastoral letters, reflections, and statements on liturgy, ministry, the Church, health care, religious education, Christology, consecrated life, AIDS, the Catholic Charismatic Movement, the permanent diaconate, and youth. The volume also includes Bernardin's interventions at four Synods of Bishops. Clergy, lay ministers and leaders will find the selected homilies, on a wide range of subjects, to be of particular value to their life and ministry.

Volume 1 is divided into two parts. Part One: Teaching Documents includes the following articles under the heading Pastoral Letters: "Our Communion, Our Peace, Our Promise (1984)," "In Service of One Another (1985)," "The Family Gathered Here Before You (1989)," and "A Sign of Hope (1995)." Articles included under the heading Pastoral Reflections include "Christ Lives in Me (1985)," "Reflections on Religious Life (1986)," and "The Challenges We Face Together (1986)." Articles included under the heading Pastoral Statements include "A Challenge and a Responsibility (1986)," "Come, Holy Spirit (1988)," "The Call to Service (1993)," "Here and Now (1994)," and "Building Bridges Between Communities of Faith (1996)." Articles included under the heading Synodal Interventions include "The Sacrament of Penance in a Sacramental Church (1983)," "The Virtue of Penance: The Ideal and the Contemporary Reality (1983)," "The Church, the World, and the Kingdom (1987)," "Spirituality of Diocesan Priests and Celibacy (1990)," and "Authenticity and Diversity in Consecrated Life (1994)."

Alphonse P. Spilly, CPPS, served as special assistant to Joseph Cardinal Bernardin in the Archdiocese of Chicago from 1984-1999. He is the director of the Joseph Cardinal Bernardin Center for Theology and Ministry at Catholic Theological Union. He is also the author of First and Second Maccabees of The Collegeville Bible Commentary series and has contributed to The Bible Today, both published by The Liturgical Press.

The Selected Works of Joseph Cardinal Bernardin, Volume 1 will be a significant addition to any serious student of post-conciliar Church life in the United States. This first volume, focusing on the Cardinal's teaching documents, shows Joseph Bernardin as the wise, kind and thoughtful shepherd we remember. In his own words, we recall the wisdom, caution and occasional daring, and practical pastoral knowledge of his years as bishop. I suspect that many of us will have recourse to these works for ideas and initiatives for our own ministry. Joseph Cardinal Bernardin's ministry lives on in his own words.
Robert N. Lynch, Bishop of St. Petersburg

This excellent first volume is almost literally a treasure trove of theology and its application to our daily lives of growth in understanding of the Lord, ourselves and each other.
Fr. Kevin Shanley, O.Carm., Catholic Explorer