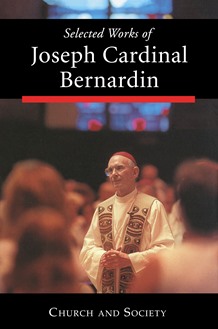 Joseph Cardinal Bernardin is widely regarded as having had more impact on the Catholic Church in the United States than any other bishop this century. By the time of his death in 1996 he had attracted the respect and affection of millions around the world. Selected Works of Joseph Cardinal Bernardin provides in two volumes the "essential" Bernardin for those interested in the faith, ecclesial vision, and pastoral insights of this great church leader.

This second volume, Church and Society, is at the very heart of the Cardinal Bernardin's teaching ministry with selected talks on the six areas that are most often associated with his name: peacemaking, consistent ethic of life, religion and society, health care, Catholic-Jewish dialogue, and the Catholic Common Ground Initiative. This volume also contains addresses on such favorite topics of Bernardin's as ecclesial vision and mission, evangelization, Catholic education, religion and spirituality, pastoral ministry, and pastoral outreach.

Volume 2 is divided into two parts. Part One: The Life of Society includes the following articles under the heading Peacemaking: "1983 Albert Einstein Peace Laureate," "Memorial Service in Honor of the 55th Birthday of Dr. Martin Luther King," "The Church in the Public Life of the Nation: The American Bishops' Pastoral Letter," "The Challenge of Peace: Ecumenical Roots and Relationships, Paul Wattson Ecumenical Seminal and Lecture Series," "The Challenge of Peace: Genesis, Principles and Perspectives of the American Bishops' Pastoral Letter," "Dialogue as Universal Foundation of Peace," "Ordering Our Destiny: Politics, Strategy, and Ethics," and "A Century of Social Teaching."

Articles included under the heading Catholic-Jewish Dialogue: "The Chicago Board of Rabbis and the Jewish Federation of Metropolitan Chicago Address," "Twentieth Anniversary Celebration of Nostra Aetate," "Center for Jewish and Christian Learning Address," "Reception of Tree of Life Award, Jewish National Fund," "Anti-Semitism: The Historical Legacy and Continuing Challenge for Christians," and "Jewish Federation of Chicago Address."

Part Two: The Life of the Church includes the following articles under the heading Ecclesial Vision and Mission: "'The Church's New Self-Understanding,' Symposium on the 20th Anniversary of Vatican II," "'Changing Styles of Episcopal Leadership,' Centennial Conference of the Third Plenary Council of Baltimore," "Satisfying the Hungers of the World's Children: Eucharist: Call to Unity and Peace," "The Catholic University of America Address," "'The Church in the Third Millennium: Age-Old Values and New Challenges,' The Eugene M. Burke, CSP, Lectureship in Religion and Society," "'The Assembly: Basis for Liturgical Renewal,' Southwest Liturgical Conference," "A Pastor's Vision, Parish Vitality Day," and "A Vision of Church: Local Church and Universal Church."

Articles included under the heading Pastoral Outreach: "Protestant Foundation," "'This Hope Will Not Leave Us Disappointed,' Garrett-Evangelical/Seabury-Western Seminaries," "Leadership Greater Chicago Address," "Humboldt Park-Logan Square-West Town Community Meeting Address," "Civic Unity in Chicago: Is It Only a Dream?" "National Committee for the Prevention of Child Abuse Address," and "'The Story of the Campaign for Human Development: Theological-Historical Roots,' 25th Anniversary of the Campaign for Human Development."

Alphonse P. Spilly, CPPS, served as special assistant to Joseph Cardinal Bernardin in the Archdiocese of Chicago from 1984-1999. He is the director of the Joseph Cardinal Bernardin Center for Theology and Ministry at Catholic Theological Union. He is also the author of First and Second Maccabees of The Collegeville Bible Commentary series and has contributed to The Bible Today, both published by The Liturgical Press.