A Matter of Justice 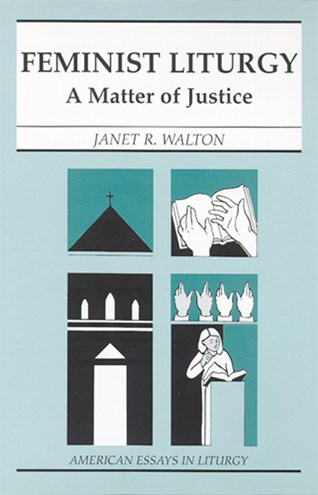 Feminist liturgy began in the midst of a broad human quest for justice in the late twentieth century. The Civil Rights Movement and the Anti-Vietnam War movement added momentum for women's struggle for justice. Within this ferment, women addressed the limits placed on them in secular and religious institutions as well. Feminist liturgies developed as one of a number of attempts to discover and claim a more truthful telling and embodying of the stories that shape our religious consciousness. In Feminist Liturgy: A Matter of Justice, Walton offers a "partial account" of feminist liturgies to encourage both discussion and action so that our liturgies will be "true" for all of us.

Walton explains that liturgies typically described as "feminist" emerged in the late 1960s when women and some men realized that what they were experiencing in the liturgies not only wasn't "enough" but, in fact, wasn't "true." A liturgical process that centers on an encounter—an engaged, embodied dialogue with God—cannot be true when females are left out of the dialogue. To make the liturgies more accurate, people joined together to discover how to use symbols, texts, and forms that expressed relationships with God more authentically.

Walton examines four aspects of feminist liturgies: the historical context in which they developed, the tasks and principles that guide them, the possibilities they offer, and application to regular institutional liturgies. In examining these aspects, Walton responds to questions, clarifies hunches, alleviates doubts, and encourages more people to contribute to the development of feminist liturgies.

Janet R. Walton is professor of worship at Union Theological Seminary in New York. She is the author of Art and Worship: A Vital Connection published by The Liturgical Press.

One book could hardly make up for the long tradition of the Church that has tended to regard the human body negatively or even not to regard it all. Bodies of Worship is a giant millennium leap in the right direction! Each chapter in its two partstheoretical and pastoralopens up a new avenue for rethinking how we use our bodies in worship, how our bodies are truly 'sacramental' or visible sign through which we are led to the mystery and majesty of God. With all my body: THANK YOU.
Joyce Ann Zimmerman, CPPS, Editor, Liturgical Ministry

. . . an excellent contribution to a much neglected field of liturgical study and to the understanding of an essential aspect of Christian worship. This book is an admirable combination of theological and pastoral reflection.
John F. Baldovin, SJ, Professor of Historical and Liturgical Theology, Weston Jesuit School of Theology, Cambridge, Massachusetts

This book will appeal to a wide range of persons within both the Church and academy. It has implications within the Church not only for liturgy and worship, but also for Christian education and spiritual formation. The academy will also benefit from this insightful scholarship that refuses to separate theory from practice.
Doxology

. . . the book stimulates the discerning liturgist to re-think liturgical practice in the light of emerging theological, sociological and anthropological issues. . . . It should be on readings lists for graduate/postgraduate students of liturgy as well as on the bookshelves of serious liturgists and pastoral ministers.
Pacifica