The Rule Of Saint Benedict 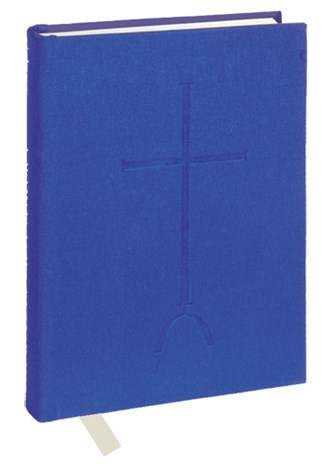 This special edition of The Rule of Saint Benedict was published for the seventy-fifth anniversary of the founding of Liturgical Press. Leonard Doyle's translation of St. Benedict's Rule for Monasteries appeared in 1948 and has remained in print ever since.

Generations of monastics, oblates and others whose lives are influenced by monastic spirituality, have encountered the Rule by means of Doyle's work, which remains by far the most widely known and used English version of the Rule. The traditional dates for the thrice-yearly reading of the Rule are included in this edition.

Simple, clear text and beautiful cover art enhance the value of this edition. The elegance of the page, as crafted by the master eye of renowned liturgical artist and designer Frank Kacmarcik, OblSB, makes it a treasure to read and study as Benedict intended. With ribbon marker.

Leonard J. Doyle (1914-1970) was a gifted translator of German, French, Latin, and Italian works for Liturgical Press, in addition to operating his own publishing company, Doyle and Finegan. His translations include such titles as Parish Holy Week Missal (1956), The Simplification of the Rubrics (1955), Commentary for Benedictine Oblates (1950), Benedictinism Through Changing Centuries (1958), A History of Benedictine Nuns (1958), among others. After Vatican II he worked on the official liturgical books published by The Liturgical Press, including the Lectionary, the Sacramentary, and the Breviary. His translation from Latin of St. Benedict's Rule for Monasteries, which was published in 1948, is still sold by Liturgical Press.

The simple elegance of the layout and typography designed by Frank Kacmarcik, Obl.S.B., the creamy feel of the paper, and the compelling presentation of the book in a rich blue binding with ribbon marker makes this both a treasure and a bargain. The quality of design invites the reader into the wonder of the text itself, and Doyle's clean, memorable rendering of the original Latin speaks nobly from the page. . . . This handsome new edition . . . is both age-old and ever new, the perfect gift for admirers of monasticism or of fine booksand a fine treat for yourself.
The Abbey Banner