The Privilege of Love 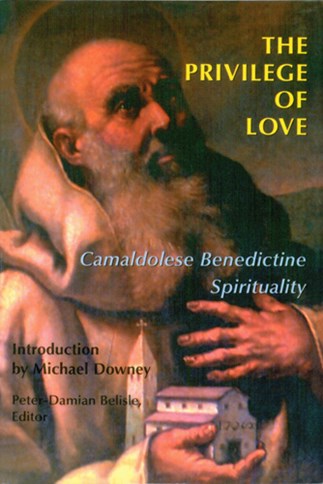 Unique in the Church, the Camaldolese life is ordered to a three-fold good: solitude, community, and witness. Men and women as hermits live by a monastic rule, committed to both solitude and community life. The discipline of solitude combined with the second good, the rigors of community living are intended to widen the heart in service of the third good: bearing witness to the abundance of God's love as the self, others, and every living creature are brought into fuller communion in the one Love.

The essays in The Privilege of Love convey the richness and the depth of the Camaldolese Benedictine spirit. Their diversity of expression is itself a manifestation of the magnitude of God’s bonding Love. This bonding is the Spirit’s own gift, weaving together the many voices found in these pages—voices of women and men, of monk, hermit, and layperson. The voices speak of historical roots, of the riches found in solitude and the grit of community life, of the psychological strength required in any pursuit of God, of the vulnerability of the human heart which is the home for wisdom’s Word, and of the privilege of being in love with Love itself.

Essays and contributors under Part One: A Vision in Context are "Overview of Camaldolese History and Spirituality," by Peter-Damian Belisle, OSB Cam. Essays and contributors under Part Two: Sustaining the Spirit are “An Image of the Praying Church: Camaldolese Liturgical Spirituality,” by Cyprian Consiglio; “Lectio Divina and Monastic Theology in Camaldolese Life,” by Alessandro Barban; “Monastic Wisdom: The Western Tradition,” by Bruno Barnhart. Essays and contributors in Part Three: Configurations of a Charism are “The Threefold Good: Romualdian Charism and Monastic Tradition,” by Joseph Wong; “Koinonia: The Privilege of Love,” by Robert Hale; “Psychological Investigations and Implications for Living Together Alone,” by Bede Healey; “Golden Solitude,” by Peter-Damian Belisle, OSB Cam; “A Wild Bird, with God in the Center: The Hermit in Community,” by Sr. Donald Corcoran; “The Camaldolese in Dialogue: Ecumenical and Interfaith Themes in the History of the Camaldolese Benedictines,” by Thomas Matus and Robert Hale; “The Camaldolese Oblate Program: History, Tradition, Charism,” by Jeffry Spencer and Michael Fish; “Concluding Remarks”; “Camaldoli’s Recent Journey and Its Prospects,” by Emanuele Bargellini; Peter-Damian Belisle, OSB Cam., Translator.

“The Bibliography for the Study of Camaldolese History and Spirituality,” provides, for the first time anywhere, a comprehensive list of Romualdian/Camaldolese source material.

This is an important collection of articles on Camaldolese history and spirituality from its founding to the present, by those who live the life.
Cistercian Studies Quarterly

If a Franciscan has anything to say about monastic wisdom, I think this is excellent spirituality. It is monastic, but also universal. It presumes community, but also offers true individuation. It is solid tradition, but wonderfully contemporary. The book appears to be for hermits, but it is for all those who would loveand love deeply.
Richard Rohr, OFM, Center for Action and Contemplation, Albuquerque, New Mexico