Denial and the Crisis in the Church 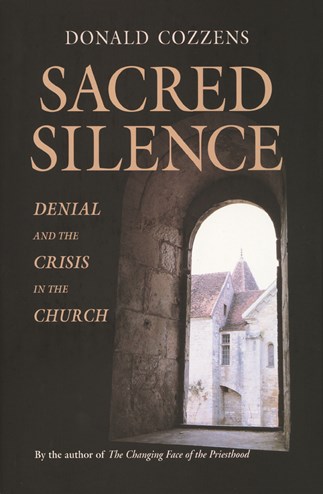 Sacred Silence is a book about failed leadership in the Catholic Church. Donald Cozzens looks at various challenges and the scandal gripping the Church and offers an historical overview of our church leadership. He explains how the misplaced loyalties of those in leadership positions created the current crisis.

Cozzens clarifies why bishops and church authorities think the way they do and why the ecclesiastical system might be the real villain in the abuse scandal. With compassion and understanding Cozzens answers the why of the present and past leadership failures and proposes a new direction.

Chapters in Part One: Masks of Denial are "Sacred Silence," and "Forms of Denial." Chapters in Part Two: Faces of Denial are "Sacred Oaths, Sacred Promises," "Voices of Women," "Religious Life and the Priesthood," "Abuse of Our Children," "Clerical Culture," "Gay Men in the Priesthood," and "Ministry and Leadership." The chapter in Part Three: Beyond Denial is "Sacred Silence, Sacred Speech."

It deserves and doubtless will enjoy a wide and appreciative readership.
Brisbane Catholic

Cozzens' words are healing and liberating; he not only nameswithout bitternessthe deficiencies of a culture of denial, he also names the possibilities of this time of crisis, dense with the vibrancy of the Spirit. Denial and the refusal to name and face what must be faced in the Church is not a lack of competence so much as it is a lack of faith. Are we not those who believe that the truth will set us free? I thoroughly endorse Cozzens plea: Let the conversation begin.
The Tablet

This book will be an eye-opener for those who are not aware of the problems discussed. Others will find more correct details than those found in newspapers. At least all priests should read this compilation of facts and learn how to speak to clerics of all levels and to our lay people. With our faith and hope in the Gospel, why should we be afraid?
Catholic Library World

If the Catholic Church is to regain the credibility it has lost through recent scandals, the two subjects of authority and sex are in need of truly serious and painfully honest attention. Donald Cozzens asks many of the questions that must be faced in confronting these two issues.
Bishop Geoffrey Robinson, Chairman of Australian Bishops Committee for Professional Standards

In Sacred Silence Donald Cozzens speaks out in a gentle voice in a way that nobody else does in today's Church. With a calmness and sureness of tone that come from his great love for the Church, he examines the tragic results of the studied silence with which the official Church, in obscuring and denying scandals, has come close to losing its soul. Father Cozzens makes a Stations of the Cross, pausing at all the points of suffering and loss derived from this official reflex of silence, a response familiar to Pilate, who trivialized truth out of fear of Roman reactions. Father Cozzens believes that only the truth makes us free and speaks it courageously in this fine book.
Eugene Kennedy, Author of The Unhealed Wound: The Church and Human Sexuality

Donald Cozzens has a fine, friendly way of defining the context and content for long-delayed conversations among Catholics. Sacred Silence renews this advocacy as did his popular The Changing Face of the Priesthood. This time around, he begins with a sturdy three-legged stool for sitting down and settling in.
National Catholic Reporter

In this balanced and clearly written book, Donald Cozzens shows himself once again to be a wise, well-informed, insightful, and truth-telling observer of the Catholic Church. This book should have as receptive an audience as his widely celebrated The Changing Face of the Priesthood. It should stimulate as much healthy controversy as well.
Rev. Richard P. McBrien, Crowley-O'Brien Professor of Theology, University of Notre Dame

Once again, the reader blinks in disbelief at the words of an American Roman Catholic priest in good standing.
Catholic Studies

Father Cozzens' earlier book The Changing Face of the Priesthood evoked criticism from many persons that he had violated the secrets of the Church. Now Cozzens responds. He demonstrates that the Church has too much secrecy for the sake of its own credibility and moral authority. The culture of the Church has long honored loyalty, deference, and silence, and the result has been disastrous. We need a brave redemptive honesty if we are to move toward a healthier, holier Church. Cozzens is a man of faith who dares to say what needs to be said. This book is the next step in a debate which the Catholic community urgently needs.
Dean R. Hoge, Professor, The Catholic University of America

Donald Cozzens thoughtfully and courageously explores the underpinnings of the current and continuing crisis of the abuse of power riddling the Catholic Church. His explanation of insidious silence and the forms and faces of denialpersonal and institutionalgenerate a kind of intervention whereby the reader is confronted with what can no longer be denied. The issues are explored with stark clarity and genuine sensitivity. His book paves a path to authentic honest dialogue, which is the only way that will lead to personal, social, and ecclesial transformation.
The Catholic Journalist

Donald Cozzens' Sacred Silence is a courageous, prophetic book: prophetic in the biblical sense of penetrating present reality to see and to speak the truth of where God is at work. . . . The messenger is clearly a man of God, his priesthood, and his church. The prose is gentle, even elegant in places; the criticism pointed but compassionate; the message challenging but empowering. The reader feels enlightened and guided but not pummeled by the discussion. For some, this book will also bring relief that denial has been removed, truth told, honest emotions faced, and the possibility of a way forward in truth and love envisioned.
Pastoral Music