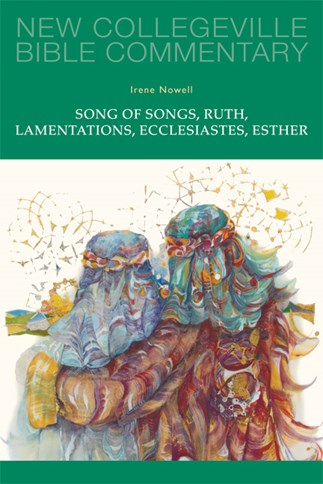 Irene Nowell's lively and thoughtful exploration of these poetic and powerful books promises to ignite appreciation and understanding in the hearts and minds of readers.

The five books abound with vivid stories of faith. The Song of Songs, dedicated to Solomon, celebrates the wonder of human love. The book of Ruth, a masterpiece of storytelling, tells of two valiant women who move from emptiness to fullness, desolation to redemption. Lamentations, telling of the destruction of Jerusalem, recognizes that the Lord has struck and that only the Lord can heal. Ecclesiastes teaches the futility of vanity and storing up riches. The book of Esther tells the story of a Jewish woman and her uncle who, by their courage and wit, deliver the Jews from threatened genocide.

Gathered together and artfully explored, this volume offers readers a wealth of information to inspire deeper understanding of the human journey and God's presence in the lives of those who trust in him.

Irene Nowell, OSB, of the Benedictine community of Mount Saint Scholastica in Atchison, Kansas, teaches Scripture courses at Saint John's School of Theology-Seminary, Collegeville, Minnesota. She is a past president of the Catholic Biblical Association, and the author of many books including Women in the Old Testament, and Numbers in the New Collegeville Bible Commentary, as well as Old Testament editor of the Little Rock Catholic Study Bible, all published by Liturgical Press.

These particular biblical books are important because they deal with such perennial issues as love, marriage, immigration, tyranny, persecution, war and defeat, as well as our varied religious attitudes toward them, ranging from skepticism and doubt to faith and trust. Important as they are, though, they are not easy to read. Nowell brings an eye for narrative and poetic detail to deal with difficulties in these texts, to explain unfamiliar customs, and to open up the meaning of these books. With her ability to clarify issues by examples that are close to home, readers will have a new appreciation for these texts.
Fr. Tom McCreesh, OP, Professor of Old Testament Studies, Providence College


Sr. Irene Nowell is an engaging, perceptive, articulate and astute teacher and reader of biblical texts. Her commentaries on the Megilloth display the literary artistry of the text, as well as the theological and spiritual riches to be found in them. One of Nowell's finest gifts is her ability to take complex and intricate ideas and express them in ways that are both engaging and enlightening. These commentaries provide gems of information and insight to enhance one's appreciation of these rich biblical texts.
Abbot Gregory Polan, O.S.B., Conception Abbey/Conception Seminary College