The Directory on Popular Piety and the Liturgy

Principles and Guidelines, A Commentary 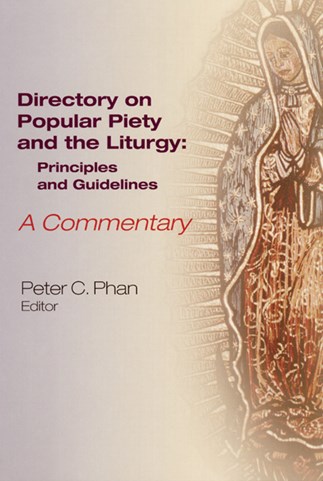 After suffering an eclipse during the post-Vatican II liturgical reform, popular piety has regained its vital role in the spiritual life of Catholics. In response to its re-emergence, the Congregation for divine Worship and the Discipline of the Sacraments issued the Directory on Popular Piety and the Liturgy on December 17, 2001. The Directory was written for bishops and their collaborators as a pastoral guide addressing the relationship between liturgy and popular piety. Directory on Popular Piety and the Liturgy: Principles and Guidelines, A Commentary by Peter C. Phan provides a chapter-by-chapter commentary on the Directory, summarizing its contents, highlighting its strengths and weaknesses, and offering suggestions on how devotional practices can be implemented in the United States. For liturgists, religious educators and students, pastoral leaders, and other interested Christians, this volume is helpful toward promoting a vigorous and authentic devotional life in the community, while respecting the preeminence of liturgical worship.

The Commentary begins with a preface by Peter C. Phan and an introduction by James Empereur, entitled "Popular Piety and the Liturgy: Principles and Guidelines." Chapters in Part One: Emerging Trends: History, Magisterium, Theology “Liturgy and Popular Piety in a Historical Perspective,” by Mark R. Francis; “Liturgy and Popular Piety in the Church's Magisterium,” by Peter Fink; and “Theological Principles for an Evaluation and Renewal of Popular Piety,” by Nathan Mitchell. Chapters in Part Two: Guidelines for the Harmonization of Popular Piety with the Liturgy are “The Liturgical Year and Popular Piety,” by Keith F. Pecklers; “Veneration of the Holy Mother of God,” by Joyce Ann Zimmerman; “Veneration of the Saints and Beati,” by Raúl Gómez; “Suffrage for the Dead,” by Peter C. Phan; “Shrines and Pilgrimages,” by Ana Maria Pineda. Concludes with a bibliography that presents the most significant recent writings on popular piety and liturgy, by Robert Brancatelli.

This text will make an ideal companion to the Directory itself and will be useful additions for graduate and seminary libraries. But diocesan offices for worship should also take note of this book. Professors of liturgy will want to place this on their syllabi, too. As a contribution to the post-conciliar renewal, these scholars have made a quantum leap toward a fuller appreciation of the primacy of liturgy and the supporting role of the Church's manifold devotions and practices.
Catholic Books Review

Whether you use this resource to absorb the spirit of a particular ritual-such as practices around funerals-or to prepare an explanation of the liturgical year for the worship committee, you will find this book clear, concise and readable. While not a substitute for the document itself, it is a handy collection of commentaries that will add further substance to the liturgical and theological background required of today's pastoral musician.
Pastoral Music

Religious educators, liturgists, pastors and parish leaders interested in the prayer and devotions of various cultures will find this commentary a helpful, thought provoking guide.
Church

...this is a very helpful resource for anyone who wants to explore the topics treated by the directory in more detail.
Worship