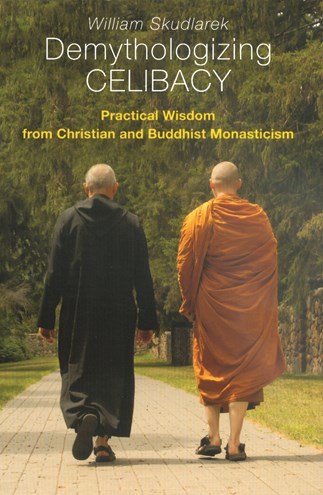 When St. Benedict compiled his Rule for Monasteries in the early decades of the sixth century, the Buddhist monastic code had already been in existence for about nine hundred years. Since monastic life is shaped by spiritual practices that are very similar across different religious traditions, it should not be too much of a stretch to suggest that Christians can learn from the accumulated wisdom of Buddhist monasticism.

For Buddhists, celibacy, accompanied by skillful reflection on their personal reactions to it, is a means of letting go of attachment to sensory pleasure. Buddhist monks do not marry; they strive to relinquish the desire for sexual pleasure because this form of gratification obstructs the one-pointed stillness that leads to insight.

For Christians, celibacy’like marriage’is ultimately about love: responding to God's love for us and expressing selfless love for others. In light of the Christian understanding of marriage as an authentic’indeed, the ordinary’path to holiness, Skudlarek proposes a demythologized view of celibacy, presenting it as an alternate and equally valid spiritual practice for those who choose not to accept the demands of a committed sexual relationship. Drawing on the monastic interreligious dialogue, Skudlarek considers the Buddhist view of celibacy, which is not mythologized as a response to a divine call or as a superhuman way of life. He examines their regard for it as simply’and profoundly’a path to freedom, peace, and happiness. As Christians become aware of the benefits of celibacy for monks who observe it without reference to the Gospel, they may be able to appreciate all the more its importance and value for those who wish to follow Christ as celibates, and in this way come to share in the freedom of the children of God.

William Skudlarek, OSB, is a monk of Saint John's Abbey and administrative assistant to the abbot. In addition to having taught theology and homiletics at Saint John’s University, he served as a Maryknoll Associate in Brazil and was a member of Saint John’s Abbey’s priory in Japan. During his years in Japan he began to practice zazen with the Sanbyo Kyodan. After serving for five years as president and then executive director of the North American branch of Monastic Interreligious Dialogue, he was appointed General Secretary of Dialogue Interreligieux Monastique/Monastic Interreligious Dialogue in September 2007.

Father William Skudlarek, OSB, has harvested a rich and broad field of sources to bring forth the practical and insightful feast that is this book. . . . With a quiet and unbiased grace, and in a spirit of offering helpful illumination in what is often a murky or at least mysterious area, the author draws upon his long-standing friendship with Buddhist contemplatives . . . Wonderfully void of the shrill authoritarianism that can cloud explorations of spiritual ethics, this book speaks with a respectful ease and an accomplished practicality; it is also a delight to encounter in its pages contemplatives of both Christian and Buddhist traditions who have developed similar pragmatic means.
Amaro Bhikkhu, Co-abbot of Abhayagiri Buddhist Monastery, Redwood Valley, California


If one wishes to learn a little about the Buddhist way to celibacy as compared to the Roman Catholic monastic way, this book is a helpful guide.
American Benedictine Review


Celibacy as a freely chosen religious lifestyle rarely gets a fair hearing today because the discussion routinely focuses on celibacy as an imposition by the Church on candidates for orders. Fr. William's presentation is uncluttered by that issue and can look at celibacy positively as an expression of mature sexuality. He expands the terrain to benefit from the lived tradition of celibacy in centuries-old Buddhist monasticism. A major contribution is the encouraging of an awareness of the importance for healthy celibate living of paying attention to one's thought world and not just to the control of behavior.
Rt. Rev. Abbot Jerome Kodell, OSB; Subiaco Abbey, Arkansas


. . . contains many interesting insights into monasticism in general, in both East and West, and into the experience of celibate living in the two traditions.
The Furrow