Studies of John's Gospel in Tribute to Raymond E. Brown 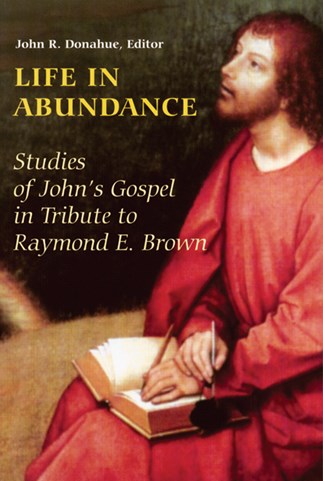 Life in Abundance: Studies of John's Gospel in Tribute to Raymond E. Brown, SS is a collection of essays, edited by John R. Donahue, SJ, which includes papers given at the "An International Conference on the Gospel of John: Life in Abundance,” that was held at St. Mary’s Seminary and University in Baltimore in October 2003, attended by leading Johannine scholars. The published essays cover the state of Johannine studies, Johannine theology, issues of interpretation, and a comprehensive bibliography of the writings of Raymond E. Brown, SS

Chapters in Part I: Johannine Studies: Challenges and Prospects are ”The Gospel of John: The Legacy of Raymond Brown and Beyond,” by Francis J. Moloney, SDB, response by R. Alan Culpepper; and "Future Directions of Johannine Studies,” by D. Moody Smith. Chapters in Part II: Historical Context and the Gospel of John are “The Whence and Whither of the Johannine Community,” by Robert Kysar, response by Hans-Joseph Klauck, OFM; “Methodological Considerations in the Study of John’s Interaction with First-Century Judaism,” by Burton L. Visotzky, response by Adele Reinhartz; “Qumran Literature and the Johannine Writings,” by Joseph A. Fitzmeyer, SJ, response by Daniel Harrington, SJ Chapters in Part III: Johannine Theology are “The Death of Jesus and the Human Condition: Exploring the Theology of John’s Gospel,” by Craig R. Koester, response by Gail O’Day; “The Resurrection (of the Body) in the Fourth Gospel: A Key to Johannine Spirituality,” by Sandra M. Schneiders, IHM, response by Donald Senior, CP Chapters in Part IV: Interpreting the Work of Raymond Brown are “Hermeneutics and the Fourth Gospel: Ricoeur and Brown on the Surplus of Meaning,” by Robert F. Leavitt, SS, response by Francis Schüssler Fiorenza; “The Incarnate World Revealed: The Pastoral Writings of Raymond E. Brown,” by Ronald D. Witherup, SS Also includes a biography and bibliography, a sermon by Phyllis Trible, “Striving After Wind,” and a homily by John R. Donahue, SJ, “A Whisper from the Grave.”

This book is a rare treat not only for scholars, but also for advanced students of the Fourth Gospel. It is a fitting tribute to a scholar and teacher of unsurpassed stature who now enjoys the full life in abundance for which we hope.
New Theology Review

The contributors to this volume have been engaged deeply in the scholarship of John's gospel and epistles and most enjoyed a warm friendship with Brown in life. The few who knew him only in his writings record the influence these had on their study and teaching.
Worship

This collection succeeds in portraying the wide range of Brown's scholarly and pastoral work and in pointing out some directions that further reflection on the topics of that work, particularly the work on the Johannine literature, can take.
Catholic Biblical Quarterly

Even in death Brown continues to teach more and more people all over the world.
America

Together, these essays and responses constitute a veritable synthesis of the shape of Johannine scholarship today. . . . This collection is a gem in every way.
Catholic Library World

This volume is invaluable for anyone interested in the Johannine literature. Scholars and nonscholars alike will find in it a responsible treatment of past scholarship and hopeful signs for future developments, which were themselves hallmarks of Brown's own scholarship.
Alan C. Mitchell, Georgetown University, Washington

This is an excellent and timely collection, which sets out the state of play in Johannine studies and offers new insight into particular theological and historical issues. It offers much of value to scholars in the field, while also accessible to students wishing to deepen their engagement with the Fourth Gospel.
Journal for the Study of the New Testament

Taken as a whole, this volume is an effective tribute to one of the seminal NT scholars of the twentieth century.
Catholic Biblical Quarterly

It has much to offer those interested in learning more about scripture study and, in particular, the place of John's gospel in the New Testament.
Carol Blank, Writing Works

. . . this book is a feast of Johannine scholarship for pastors, scholars, and college students, as it raises all the critical concerns in Johannine studies and presents an excellent overview of last century's major trends. A must read.
Religious Studies Review