God and the Gift

An Ecumenical Theology of Giving 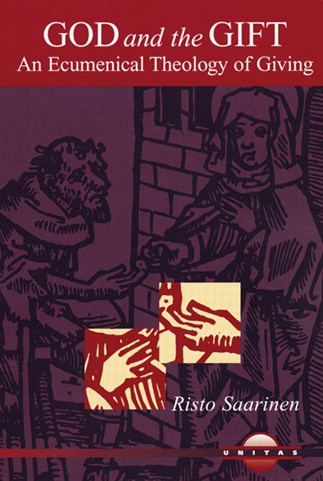 The observation that contemporary theological and philosophical discussions about ecumenism center on the issues of reception and the gift but neglect the basic act of giving is the starting point of God and the Gift. Risto Saarinen asks if we can approach these discussions from the perspective of giver?

In God and the Gift Saarinen demonstrates that we do have theological resources that enable us to outline a theology of giving. He deals with basic philosophical and theological resources and outlines some specific modes of giving, in particular forgiveness, sacrifice and thanksgiving, and living by example.

God and the Gift outlines a brief theology of giving by employing both classical theology and contemporary discussions. It also points out the ecumenical relevance of the theology of giving. For those who are more interested in particular theological and philosophical topics, some new interpretations are offered for further discussion. Among these are an interpretation of forgiveness as negative giving, a discussion on the relationship between sacrifice and divine non-violence, and a new proposal to conceptualize various types of Christian imitation.

These aims are connected with the overall claim that instead of looking at reception and the gift itself we should focus on giving. Saarinen illustrates this shift of perspective with observations and examples. Though not discussed exhaustively, they serve as preliminary signposts showing us the way to proceed.

Risto Saarinen, ThD, PhD, is professor of ecumenical theology at the University of Helsinki and a member of the Finnish Academy of Science and Letters. He served as research professor at the Centre d'Etudes Oecumeniques in Strasbourg from 1994 to 1999.

In this book, Risto Saarinen has a great many balls in the air: Derrida et al on gift, eucharistic sacrifice, the state of ecumenism, New Testament lexicography, how to avoid Pelagianism, Martin Luther, and many more. Just when you think a ball has been dropped, a hand reaches out and snags it. Saarinen's conceptual juggling is at once subtle and precise. Perhaps the central achievement is to show how different many gifts or exchanges look when considered from the viewpoint of the giver rather than from the viewpoint of the recipient.
Robert W. Jenson, Senior Scholar for Research, Center for Theological Inquiry, Princeton

A gift to theology and to the ecumenical movement.
Catholic Books Review

A wonderful and necessary book, weaving together discourses which often remain apart. Saarinen integrates philosophical and sociological with theological approaches, thus coming up with a comprehensive presentationlast not least of great ecumenical relevance. The book gets to the core of Christianity which truly lies in God's giving!
Oswald Bayer, Tübingen University, Germany