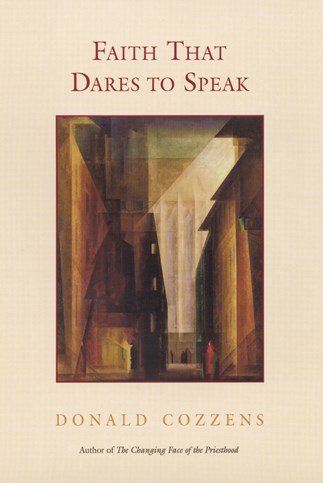 Faith That Dares to Speak

The Catholic Church at the dawn of the twenty-first century is arguably the last feudal system in the West. Once the feudal structure of the church is recognized, the bishops' response to the clergy abuse crisis comes into focus. Bishops and other church authorities reacted to the scandal the only way their feudal culture allowed--with secrecy, denial, and a no holds barred effort to protect the reputation, authority, and resources of the institution. While tragic, and in many cases reprehensible, their response was consistent with the way feudal systems function.

In Faith That Dares to Speak, Donald Cozzens addresses the laity's role in challenging a feudal church to embrace accountability and transparency and to bring light where there is now darkness. Awakened to their dignity and responsibility as full, equal, and adult members of the church, lay Catholics in North America are finding their voice and daring to speak to church authorities long accustomed to deferential obedience and compliance.

Church life, Cozzens believes, will never be quite the same.

Chapters include "The Courage to Speak," "The Humility to Listen," "Love That Dares to Question," "The Liberation of the Laity," "Voice of the Faithful," and "Contemplative Conversation."

Donald Cozzen's Faith That Dares to Speak is a poignantly honest, deeply caring, painfully direct post-pedophilia analysis of the present state of the Catholic church. At the same time, this book is different because more than simply revisit the pedophilia problem, it points out what the church must do to rebuild its place and moral suasion in this culture at this time. It puts its finger on the weaknesses of the system that led to this kind of internal debacle and names the pieces that must be replaced if the church is to rise from this scandal stronger than ever. It is easy for an institution to ignore this kind of social audit because it calls for more than public relations strategies; it calls for a total review of principles, purpose and internal practices. But you get the idea as you read it, that though ignore it we may, we do so at our peril. This book is a gift to the church.
Joan Chittister, Benetvision, Erie, PA


. . . this is no ordinary book about the sexual abuse scandal that rocked the Catholic world.
Ministry & Liturgy


With remarkable candor and courage, Fr. Donald Cozzens has issued a resounding challenge to the Catholic Church-the WHOLE church-to begin `a passionate conversation' between the laity, the clergy and the hierarchy.
SALT


This book is highly recommended for all those involved in renewal and reform in the Roman Catholic tradition. It would be useful in ministry education programs as well as parish discussion groups. Cozzens' deep love for the church flows between the lines and moves the reader to dream of the Catholic Church of the 21st century as a community of equals, reclaiming moral integrity, and striving to live in true Christian witness to the world.
Catholic Books Review


Cozzens' book . . . has much to offer. Many Catholics in the United States have a growing sense that the Catholic Church is no longer speaking in a language and in a manner that addresses their needs and their hopes, but they don't know what to say or do to be heard. Cozzens offers them an affirmation of what they feel and a call to action to do something about it.
Emmanuel


Given the distance between so many in Church leadership and so many in the pews, Faith That Dares To Speak is an even-handed witness to communion. It is compassionate, hopeful, forgiving and invitational. It belongs in the conversation as all Catholics build a Church for the 21st Century.
VOTF Newsletter


Faith That Dares to Speak is an often painful read, but it is a very hopeful book. It should encourage all of us to believe that the church we love can do and be better if we cultivate the courage to speak and act no matter what the cost. Anyone teaching ecclesiology, whether at the popular or scholarly level, in these difficult days for the church could well use it as a required reading. Cozzens does not avoid the neuralgic issues and does not hesitate to trace the problems to their sources not only in institutions but in the human heart. But he also has a vision of and hope for conversion. I hope Cozzens' courage-calm and respectful but unflinching-will inspire many of his fellow clerics, including bishops, to 'go and do likewise.'
Sandra M. Schneiders, IHM, Professor of New Testament and Christian Spirituality, Jesuit School of Theology, Berkeley, California


Cozzens is bold in his writing , writing he describes as "weighty and serious.
Ministry & Liturgy


Courageous discipleship can renew our church,' Father Don Cozzens says, and laity, religious, clergy, and bishops alike are disciples. Both as a psychiatrist and as a Catholic college president, I praise his art of co-responsible dialogue at a time when so many voices fall into fruitless and counter-productive opposition. What American Catholics needall of us together, and especially the rising generationsis a deeper, truer and more accountable unity in going forward. Cozzens opens doors and builds bridges in what has to be understood as genuine pastoral writing.
Mary Jane England, M.D., President, Regis College


This is a must read. Father Cozzens is a prophetic voice who speaks with urgency of issues facing today's church. He is in touch and speaks out of love.
Abbot Damien Thompson, OCSO, Abbey of Gethsemani, Trappist, Kentucky


In Faith That Dares to Speak Fr. Cozzens continues his reflection on the church in the context of its history and contemporary culture. From his dialogue between the past and present we gain a deeper understanding and honest assessment of the church from which clergy and laity alike can respond with compassion and hope. It opens our hearts and minds regarding the relationships among all members of the church and calls us to find our voice and join the conversation.
Robert G. Toth, Executive Director, Thomas Merton Foundation


. . . The table of contents will throw you because the book seems to have safe, almost Pollyannaish components. Don't be fooled.
Ministry & Liturgy


Faith That Dares to Speak is a fine book, desperately needed, and one that years hence may be seen as prophetic.
America


His book is a serious contribution to the conversation taking place at this most critical time in the history of our church.
National Catholic Reporter


This book is a great contribution to the growing consensus on the need for structural renewal and the reform of governance in the church. In it, Donald Cozzens models a `faith that dares to speak' with clarity, courage, and love for the church.
Rev. Msgr. Douglas Doussan, New Orleans, Seminary Journal


A stirring call to the laity to regenerate the church from the core and overturn what Cozzens considers to be the last remaining feudal system in the West-the church hierarchy.
Conscience


Faith that Dares to Speak is a revolutionary testimony calling for the transformation of the Catholic Church from a feudal format into a new era of accountability and transparency. The dawn of the twenty-first century has seen the Catholic Church beset with scandals, perhaps most reprehensibly sexual abuse scandals involving children, and the Church has repeatedly reacted in a manner consistent with feudal culture-secrecy, denial, and an all-out effort to protect reputation and institutional resources. This feudal response neglects the poison of unethical and even criminal behavior within the Church, and the Church itself is in dire need of transformation; the author focuses upon the voices of lay Catholics in North America calling for needed change. A highly recommended contribution to modern religious and Catholic Studies.
The Midwest Book Review, Reviewer's Bookwatch


This is an important book. Its credibility is enhanced by the fact that the author, who so strongly advocates courage, integrity, and humility, has clearly demonstrated these virtues in his own writing. His voice rings true.
Pastoral Music


This book is not easy to read and tells us we need to examine the fears that breed mistrust and suspicion among the various factions of the church. What is it that we fear will be lost? We can ignore such questions only at the peril of the integrity of the Church founded by Christ.
Catholic Explorer


The book is filled with the faith and courage of its author. It is engaging; carefully nuanced; respectfully written; well researched; candid and forceful; and challenging to bishop, priest, and laity.
Rev. Msgr. Douglas Doussan, New Orleans, Seminary Journal