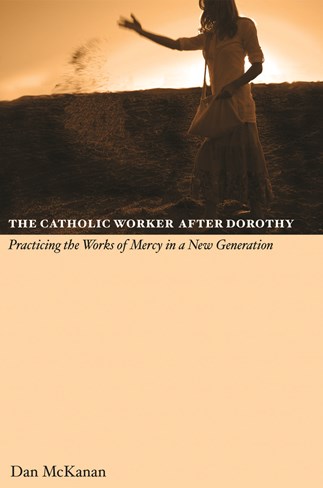 The Catholic Worker After Dorothy

Practicing the Works of Mercy in a New Generation
Dan McKanan

When Dorothy Day died in 1980, many people assumed that the movement she had founded would gradually fade away. But the current state of the Catholic Worker movement’more than two hundred active communities’reflects Day’s fierce attention to the present moment and the local community. These communities have prospered, according to Dan McKanan, because Day and Maurin provided them with a blueprint that emphasized creativity more than rigid adherence to a single model. Day wanted Catholic Worker communities to be free to shape their identities around the local needs and distinct vocations of their members. Open to single people and families, in urban and rural areas, the Catholic Worker and its core mission have proven to be both resilient and flexible. The Catholic Worker after Dorothy explores the reality of Catholic Worker communities today. What holds them together? How have they developed to incorporate families? How do Catholic Workers relate to the institutional church and to other radical communities? What impact does the movement have on the world today?

Dan McKanan is associate professor and chair of the theology department at the College of Saint Benedict and Saint John’s University. He also teaches in the peace studies department and the Saint John’s School of Theology and has previously published Touching the World: Christian Communities Transforming Society (Liturgical Press, 2007) and Identifying the Image of God: Radical Christians and Nonviolent Power in the Antebellum United States (Oxford, 2002).

While many observers inside and outside the Catholic Worker today view Dorothy Day's death in 1980 as a sharp boundary between the more orthodox past of the movement she co-founded and its less coherent present, The Catholic Worker after Dorothy belies its title and presents its history in an unbroken sweep, a living tradition, from its founding to the present. Dan McKanan reminds us that the Catholic Worker was never monolithic in its doctrinal orthodoxy as some suppose. He documents how the tendencies and tensions that are often lamented as confirmation that the present-day movement has succumbed to the `secular confusion of the age' were part of the Catholic Worker scene and vigorously discussed during Day's lifetime.
Brian Terrell, Executive Director of Catholic Peace Ministry, Des Moines, Iowa


McKanan's book . . . demonstrates that the seedlings Peter Maurin and Dorothy Day planted seventy-five years ago have taken root, borne fruit, and sent off new tendrils of their own. The next twenty-five years ought to be interesting ones-both to be part of and to report on.
Commonweal


All of us, `after Dorothy,' now share the haunting, beautiful and difficult work of loving God and each other with the authenticity and grace that originally inspired the movement. With a fresh rendering of the historical narrative, Dan McKanan shares the wisdoms of preceding generations and tells that the fire of Christian love contained in the daily practice of the works of mercy can heal us and take our forebears' `revolution of the heart' into the future.
Michael Boover, Catholic Worker and Assistant Professor of Theology and Religious Studies, Anna Maria College, Paxton, Massachusetts


McKanan's book is a fascinating read. It captures through first-hand accounts the essence of Day's spirit and the spirit of the Catholic Worker Movement.
Prairie Messenger


It is excellent and much needed.
David O'Brien, Loyola Professor of Catholic Studies, College of the Holy Cross, Worcester, Massachusetts


A welcome addition to studies of the Catholic Worker movement.
The Journal of Religion


The Catholic Worker Movement celebrates its 75th birthday (1933-2008). It did not dissolve after Dorothy's passing in 1980 and Dan McKanan explains why. The seeds of the movement were planted in the most fertile and enduring soil-the daily practice of the works of mercy. The work itself is the tie that binds, sustains, unites and brings great joy. There are no hard line dogmas; a gentle personalism is all that's required. It's that simple.
Willa Bickham and Brendan Walsh, Co-founders, Viva House, Baltimore Catholic Worker


If you want to be drawn into a story of response to God's call, I encourage you to read this excellent book. . . . [McKanan] is clearly a man who has captured the living spirit of Day and Maurin and those who follow in their footsteps. He challenges all of us to join them in practicing the Works of Mercy in whatever ways are possible in our situations. Highly recommended!
Catholic Library World


[G]ives the movement's history, some analysis, and a promising look ahead.
Initiatives


From all the works that explore the past, the present, and the future of the Catholic Worker (CW) movement, [this book] by Dan McKanan stand[s] out for [its] insight, thorough historical research, sensitive evaluation, and forward-looking orientation.
The Catholic Historical Review