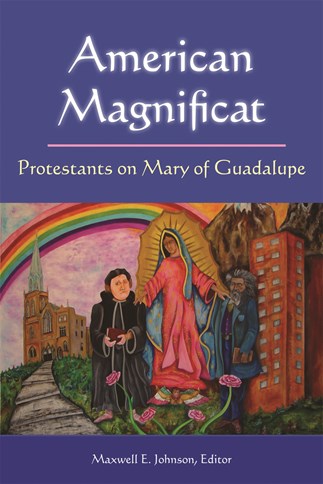 Protestants on Mary of Guadalupe
Edited by Maxwell E. Johnson

When Our Lady of Guadalupe appeared to Juan Diego at Tepeyac, she sent him to the bishop with the message that she desired a hermitage where all people would be welcomed and would experience her love. And yet, until recently, the message of Guadalupe has been limited to Catholics, particularly Mexicans and Mexican Americans. With this volume of essays, however, a variety of Protestant theologians engage the tradition surrounding Our Lady of Guadalupe to demonstrate that she has a place in Protestant churches. The multicultural dynamic of today's churches, Catholic and Protestant alike, means that cultural elements of people's faith cannot be dismissed. Rather, they are to be explored and contemplated, possibly embraced and integrated into the broader church life. By critically and thoughtfully engaging the Guadalupe story, the authors in this volume provide insights on how Our Lady can be welcomed into the prayer life and worship of Protestant communities.

With a foreword by Timothy Matovina and concluding reflection by Virgil Elizondo.

Maxwell E. Johnson, PhD, is professor of liturgy at the University of Notre Dame and an ordained minister of the Evangelical Lutheran Church in America. He is author of The Rites of Christian Initiation: Their Evolution and Interpretation (Liturgical Press, 2007, revised and expanded edition) and several other Liturgical Press books as well as being a frequent contributor to Worship.

This rich collection of essays by a group of eminent Protestant scholars considers the theological and cultural significance of Our Lady of Guadalupe. The intelligence and generosity these contributors bring to bear on the topic is illuminating. Their labors reflect the truth of the old dictum: De Maria, numquam satis.
Lawrence S. Cunningham
John A. O'Brien Professor of Theology
The University of Notre Dame


While the proposals here may be too bold for many in the evangelical and Pentecostal traditions to implement in their congregations, the essays provide rich resources for preaching and an effective text for discussing the popular religion of Christians in a variety of academic and pastoral contexts. For most Christians, popular piety, be it Marian or charismatic, and popular prejudices and misconceptions, have a stronger hold on the imagination than historical affirmations of the Incarnation or careful biblical exegesis. This study, therefore, is an important contribution to building bridges among Christians and deepening understanding on one of the most contentious issues in Christian piety.
Bro. Jeffery Gros, FSC, Memphis Theological Seminary, Australasian Pentecostal Studies


American Magnificat: Protestants on Mary of Guadalupe discusses how Mary of Guadalupe, a tradition of Mexican Catholics, has spread towards being embraced by some other aspects of Christianity, namely the Protestant faith, and the influences that ignore sect or branch are things that cannot be ignored. American Magnificat is a choice addition to any Christian studies or general religious collectio
Midwest Book Review


This volume is an ecumenical, theological, and spiritual treasure. Maxwell Johnson and his colleagues interpret the story of the encounter of Mary of Guadalupe with Juan Diego as a true preaching of the Gospel-good news of salvation, especially for the poor. In the hands of these creative scholars and pastors, an area of theology and spirituality that for too long has been a source of division among Christians-Mary and the saints-becomes a shared resource for Christian prayer, unity, and mission in a multicultural world.
Mary Catherine Hilkert, OP
Professor of Theology
University of Notre Dame
Notre Dame, Indiana