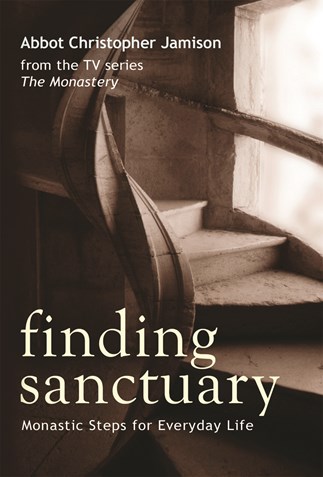 In Finding Sanctuary Abbot Christopher Jamison, host of the BBC television series The Monastery, suggests the teachings of St. Benedict are a tool for everyday life—for those who are religious and for those simply searching for spiritual guidance.

The Monastery involved five non-monks living the monastic life for forty days while TV cameras tracked their progress. The sight of monks responding thoughtfully and helpfully to ordinary people's struggles was a surprise to millions of viewers who had presumed that monks were out of touch.

St. Benedict wrote his Rule for monastic living 1,500 years ago when he was abbot of Monte Cassino, the monastery that sits atop an inspiring mountain to the East of Rome. The name, The Rule of St. Benedict, often misleads people into thinking that Benedict wrote a book of rules. In fact, he wrote insights for Christian living, with practical suggestions for daily practice. The insights still guide people today and many of the rules have been adapted to local conditions as Benedict requested.

In every generation monastics integrate modern realities and the wisdom of the Rule in a new fusion. That fusion is the spiritual energy enabling monasteries to be places of sanctuary today as they have been for centuries. And that sanctuary can be recreated in the hearts of people of good will. This book explains how St. Benedict's wisdom can be applied to busy modern lives, and how sanctuary, peace, and insight can be achieved by people living inside and outside of monasteries.

Visit the Finding Sanctuary website, which offers further steps for finding sanctuary in your life.

Christopher Jamison is abbot of Worth Abbey, a Benedictine monastery near London. He was the host of the surprise hit BBC documentary series The Monastery.

Few will be able to simply read this book, but instead will find themselves absorbing it.
Writing Works


There is much food for thought and prayer as Jamison details counter-cultural chapters on silence, contemplation, obedience, humility, community, spirituality and hope. In his explanation of each of these qualities of a Benedictine-informed life, he assists us to assess our own spiritual awkwardness, states of denial and compromise, lack of religious depth and avoidance of conversion. Whatever might be our failings or foibles, Jamison supports us in creating a meaningful and theologically grounded sanctuary for everyday living.
Catholic Studies


. . . readers will be surprised at how important ancient monastic practices are for our modern lives. The book is well worth reading.
Liguorian


There is much to be appreciated at this buffet. What's most appealing is that it is written for a significant and growing audience: the unchurched spiritual seeker. . . . There's much to recommend this book to that unchurched seeker who's looking to learn more, or simply someone who may be interested in contemporary applications of monasticism. It all depends, I guess, on what you're hungry for.
American Benedictine Review


This book helped me to make daily time alone with God a continued priority in my life.
Christianity Magazine


At one time, spirituality and religion were the same; not today. One can experience spirituality without being a member of a religion, and many have turned away from Christianity or other religions looking for some kind of spirituality that will make them feel good or give them whatever they need in life. Abbot Christopher talks about those who shop for spirituality and shows that religion and spirituality should not be separated. Abbot Christopher's last chapter us on hope; the Rule of St. Benedict encourages all followers not to lose hope in life and, especially, in life everlasting. . . . Finding Sanctuary is highly recommended to those looking for more in life than the rat race.
Curled Up With A Good Book


Abbot Christopher outlines the wisdom of St. Benedict and suggests how it can be applied to people outside the monastery. His voice is tuned especially for those who are not sure what they believe but are looking for ways to find spiritual space and peace in the busy and often confusing modern world.
Crux