The Journey of Thomas Merton 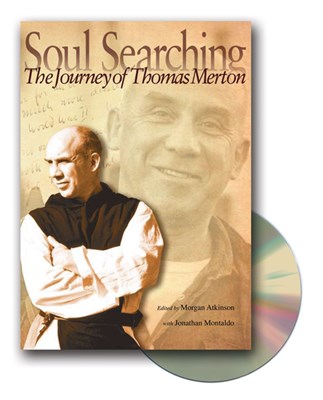 Soul Searching: The Journey of Thomas Merton draws us into the geographical landscape of Thomas Merton's life in America, a landscape that was intrinsic to his spiritual journey. Containing a considerable amount of rich material unused in the documentary by the same name, Soul Searching is alive with the narrative of those who either knew Merton well or passionately care about him: Father Daniel Berrigan, Rosemary Ruether, Martin Marty, Paul Elie, and many others. Their insights are linked to the places-from the Abbey of Gethsemani to the Redwoods Monastery in California, from New York City to Christ in the Desert Monastery in New Mexico-that both nurtured and shaped Merton. The picture that emerges, through both the narrative and vivid photography, is filled with provocative insights into the interior landscape of one of the spiritual giants of modern times. Bonus DVD of the PBS documentary by award-winning producer Morgan Atkinson is also included.

Soul Searching is a film that integrates Merton's life and his important insights as highlighted by many people in the film who truly understand that message. It could only have been produced by someone who `gets it'-someone who is soul searching and on the journey himself. Atkinson is representing all those people whose lives have been influenced or changed by Thomas Merton, and as such, Soul Searching is both a work of gratitude and a gift to those who will discover Merton's transforming vision through this film.
Robert Toth, The Merton Institute for Contemplative Living

The Merton documentary is an inspiring and moving experience likened to a short (mini) retreat. Dialogue following the film with its very knowledgeable producer Morgan Atkinson added insight to Merton's life and journey. This is a vocation story that is compelling and challenging for Christians today and well worth the time.
Susan M. Mountin, PhD, Director of Manresa Project, Marquette University

Soul Searching is an excellent introduction to Merton's life and thinking. Its generous use of well-reproduced photographs, and chatty style, make it very accessible.
The Merton Journal

Soul Searching is a genuine tribute to the life and works of a 20th Century master of the spiritual life.
Prairie Messenger

[S]oul Searching: The Journey of Thomas Merton . . . will inspire anyone who seeks meaning and spiritual depth in his or her life journey . . . Atkinson honestly presents the human struggles facing Merton as he sought solitude, embraced chastity, challenged his ego, and lived his monastic vows . . . Everyone wanting to know more about Merton, and anyone who wants to accept his challenge to an authentic, contemplative life will find this DVD insightful, honest, and stimulating.
Jan Jett, Spiritual Director, Writer, Presence Magazine

A large group of faculty, staff, students, and people from the surrounding community were in attendance last night [March 5, 2008] to view Morgan Atkinson's film documentary, Soul Searching: The Journey of Thomas Merton. Atkinson's film captures the life of this brilliant, powerful, and deeply spiritual man in a moving and compelling presentation. This was more than a film about a holy man; it was also a mini-retreat about conversion, holiness, and the struggle to know God. As they left, audience members, young and old alike, thanked the director for this outstanding contribution to their own spiritual journey. `What a fine presentation last night!' commented a seasoned faculty member the next day. `Thank you so much for making it possible.'
Paul D. Woolley, Associate Director, Ignatian Center for Jesuit Education, Santa Clara University

Viewing Morgan Atkinson's film on Thomas Merton proved to be a profoundly religious experience. It brings out so well the paradoxical character of Merton, the monk, poet, peace activist, and spiritual writer who influenced the lives of so many during his short life. Highly recommended.
Br. Patrick Hart, Monk of Gethsemani and Merton's last secretary

While the book would not fit into your back pocket it would grace any prayer stool, bedside locker, glove compartment, or student desk. It is a good introduction to Merton and whets the appetite for further reading.
The Furrow

Soul Searching: The Journey of Thomas Merton, is an excellent introduction to the life and thought of Thomas Merton. In this film Morgan Atkinson goes beyond the surface biographical facts and opens up for the viewer the heart and the soul of Merton's search. Soul Searching abounds with wonderful images and insightful interviews.
Dr. Paul Pearson, Executive Director, The Thomas Merton Center, Bellarmine University

Merton speaks to each generation about prayer, social concern, interreligious dialogue, and the search for the true self. Soul Searching helps us meditate on this legacy, and may send many more people back to the books that Merton himself wrote.
Commonweal

La Llamada hosted Morgan Atkinson to share his documentary that speaks about one's man response to a Call (La Llamada), the challenges of that call, and how he lived it out in a very real and human way. The invitation for each of us to reflect on our lives, keep real, keep it human, and respond to live one's life fully. These are the insights gained through this documentary that was shared with our students at Our Lady of the Lake University.
Gloria Urrabazo, VP of Mission, Our Lady of the Lake University, San Antonio, Texas

What an inspiration you were to the attendees at the joint monthly luncheon series of two Presbyterian churches! We were moved not only by the story of Thomas Merton, which you have so artfully assembled, but also by your devotion to assure that his transcendent spirit and beliefs live today. Through you, Merton has much to say to searching people of all faith traditions.
Ann and Ivan Schell, Co-Chairs, Presbyterian Union Series, Second and Highland Presbyterian Churches, Louisville, Kentucky

[Y]oung and old, who are looking for a spiritual guide [are encouraged] to read this book.
Pastoral Music

Soul Searching gently and clearly pulls together the wide spectrum of the facets of Merton's life as a man and a great spiritual writer of the 20th Century. The carefully crafted volume of gifted reflections of women and men who either knew him personally or through the study of his writings invite the reader to more easily understand the remarkable and often complex persona of the enduring Merton. It is a beautiful companion to the DVD, but it stands alone as a most special addition to any personal Merton library.
Anne McCormick, Trustee, Merton Legacy Trust

The Martin de Porres Center was privileged to sponsor the central Ohio premiere of Morgan Atkinson's film, Soul Searching: The Journey of Thomas Merton, on January 31, 2008. Most of the audience were well familiar with Merton's story but seemed to be moved and inspired by the facets of his life addressed so uniquely and so artistically in the film. The audience made the most of the opportunity to engage the filmmaker in dialogue after the viewing. On a weekday evening with a winter weather advisory, this program attracted a record number of participants, speaking directly to the appeal of the film and its maker.
Dr. Christina Butler, Director, Martin de Porres Center, Columbus, Ohio

Soul Searching is a powerful, rich, and rewarding meditation on the life of Thomas Merton. It not only provides valuable insights into who Merton was and why he wrote as he did, but invites viewers to look deeply inside themselves as well, using Merton's words and the reflections of both scholars and those who knew him personally.
Paul Wilkes, Writer, Director, Co-Producer of the 1985 PBS documentary Merton: A Film Biography

The book of reminiscences, like the documentary, will surely awaken interest in Merton as an outstanding cultural figure and spiritual pilgrim.
Midwest Book Review

In Soul Searching, the insights of two dozen Merton scholars, biographers, friends, and monastic brothers are woven together into a rich and intricate tapestry. To listen in on these marvelously articulate yet engagingly informal conversations is an education and a delight. This volume is not only a superb complement to Morgan Atkinson's acclaimed film of the same name, but a significant achievement in its own right, providing vivid testimony that makes clear why Thomas Merton's life and work continue to matter for Church and world four decades after his death.
Patrick O'Connell, Editor: The Merton Seasonal, Co-author: The Thomas Merton Encyclopedia, Editor: Merton monastic conferences series

Following the film release, Soul Searching: The Journey of Thomas Merton as a book makes a considerable contribution to Merton studies. Twenty-four well-known Merton interpreters reflect on the monk, the solitary explorer, the social critic, and the man of letters in this engaging volume, thanks to the editorial collaboration of Morgan Atkinson and Jonathan Montaldo. It can be highly recommended to all seekers of God in our troubled times.
Br. Patrick Hart, Monk of Gethsemani and Merton's last secretary

Soul Searching: The Journey of Thomas Merton is a meditation walk along the interior landscape of a great American mind . . . It follows Thomas Merton's path-as Trappist monk, poet, essayist, spiritual writer, peace activist, environmentalist, and hermit-from his youth as a Columbia undergraduate to his death in Bangkok at the age of 53. In bringing to life his 27 years as a monk, this deeply considered film reveals the struggles of Merton's spiritual search and how he emerged from this crucible with an international reputation in 20th century letters-part Augustine, part Emerson, part Gandhi.
From the Mendocino Film Festival catalogue

Yes, another book on Merton! This one offers you his endless fruitfulness through some amazing inside sources, but also Morgan Atkinson's brilliance in putting it together so creatively. Read, and be broadened by the great Merton once again!
Richard Rohr, OFM, Center for Action and Contemplation, Albuquerque, New Mexico

[T]he most significant part was to see Merton's humanity. It just makes him so real and human. When Merton speaks about the business of people: running around as if what they are doing is really important. It made me realize that nothing I do, stress about, is important unless it helps me get closer to God. [T]he most powerful message for me is that `You must have doubt to have faith.'
Soul Searching documentary evaluations from students of Our Lady of the Lake University, San Antonio, Texas

Thomas Merton was a highly spiritual man who gave much comfort to many people, and Soul Searching is a read for those to who want to be inspired further.
Midwest Book Review

With grace and candor, Morgan Atkinson captures the diverse-sometimes contradictory-aspects of Thomas Merton's personality and life in this thorough and moving portrait of the brilliant Trappist monk whose writing continues to attract and influence readers around the world.
Dianne Aprile, Author of Gethsemani, Place of Peace and Paradox