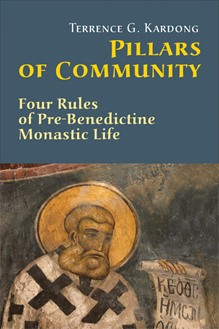 Anyone who has explored a great Romanesque church has been impressed, even awed, by the mighty stone foundations supporting the great central tower. As four pillars give a firm base to these soaring structures, so four ancient Rules stand beneath the foundations of Western monasticism, giving a structure on which later spiritual architects, Benedict among them, would build. In this book Terrence Kardong explores the lives and Rules of four of the earliest monastic writers-Basil, Pachomius, Augustine, and the anonymous author of the rules of Lerins. In engaging fashion he shows how the lives and social milieu of these earliest founders shaped their monasticism. For example, readers will learn that:

Yet as varied as these Rules are, they are based on the same fundamental understanding of what a Christian monk and a Christian community should be; thus they furnish a solid foundation for the great edifice still to come.

Kardong's achievement is remarkable. The reader finds Kardong to be a sure guide to the world of pre-Benedictine monastic life, providing him or her with the latest research. As always with Kardong, his own comments are as elucidating (and entertaining) as the subject he is writing about. Reading him is like sitting down over a cup of coffee with a sage who has the ability to make the ancient current, the recondite clear, and the potentially boring, exciting.
American Benedictine Review

This very interesting and important book is based on over twenty-five years of scholarly research spanning almost every aspect of cenobitic monasticism plus fifty years of lived monastic experience. As a scholar Terrence Kardong is famous for addressing significant topics and issues that other scholars tend to ignore. He always seeks to ask the better question and never settles for the easy answer no matter where the result leads. Pillars of Community is vintage Kardong making accessible in a creative and fresh way the very foundations of cenobitic monasticism. This book fills a gap in monastic history that has gone largely unnoticed for years.
Eugene Hensell, OSB
Saint Meinrad Archabbey, Indiana

Kardong has the rare gift of being able to distill the results of a vast amount of complicated scholarship, often written in languages other than English, in a way that is highly readable, informative, and enjoyable. His style is clear and simple; his prose is wry and witty; and his discussions are peppered with insights gleaned from over fifty years of living as a cenobitic monk himself. He has produced a gem of a book.
Cistercian Studies Quarterly