Who Can Stop The Wind?

Travels in the Borderland between East and West 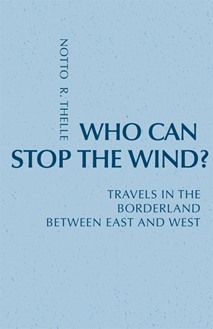 Buddhism and Christianity, two religions with distinct worldviews, are sometimes thought to be irreconcilable. Notto R. Thelle holds a different view. His life and work have been divided between the East and the West, which has given him the privilege of having to live "on the boundary," in a continual inner dialogue between his basic Christian commitment and the challenges and inspirations from the East. In Who Can Stop the Wind? he shares the thoughts and experiences generated by these encounters. With him, we come to realize that the border zone is not just "out there"; it also exists in our minds. By asking questions that engage both the Eastern and Western religious traditions, Thelle urges us to seek a larger faith.

Notto R. Thelle is a senior professor of theology at the University of Oslo, Norway. He formerly spent sixteen years in Japan, where he was involved in research, dialogue, and pastoral work. Thelle has published several Norwegian textbooks on and translations of Buddhist and Eastern traditions. But his deepest commitment is the existential search for meaning, which has primarily been expressed in preaching and teaching, various types of dialogues, and particularly in writing.

Notto Thelle's Who Can Stop the Wind? is a Christian's theological engagement with the truth and power of religious pluralism. He dialogically engages with this pluralism, mostly in Japanese Zen Buddhist forms, that both affirms the depth of non-Christian Ways as he 'passes beyond dialogue' to a renewed understanding and appreciation of the depth of the Christian Way. In the process, he becomes a model for the possibilities of creative transformation in a religious world that is true to the deepest insights and experiences of Christian faith as well as non-Christian faith and experience.
Paul O. Ingram
Professor Emeritus
Pacific Lutheran University

In today's global village, where religions can no longer live in `innocent' and `safe' ignorance of one another, thoughtful Christians are trying to understand other faiths as never before in our history. Most of us, alas, have too little opportunity for profound exposure to these others. But some there are who can help us-because they have left the familiar homeland of the once-Christian West and lived in the `borderland' between Christianity and another sincere faith. Among the latter, Notto Thelle seems to me an extraordinarily insightful guide and pioneer. His very readable book is not a theoretical study of the relation between Buddhism and Christianity, but a lived experience and dialogue. It should be required reading for students of theology-and indeed for all serious Christians.
Douglas John Hall, CM, ThD, Emeritus Professor of Christian Theology, McGill University, Montreal, Canada