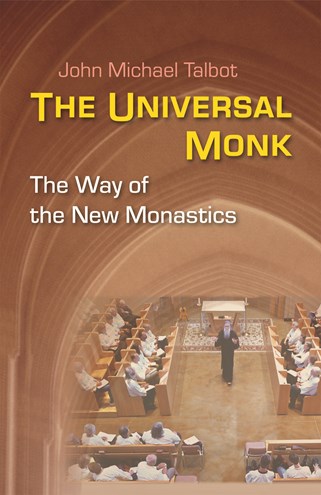 The Way of the New Monastics
John Michael Talbot

The Universal Monk is about the monk in all of us. In today's fast-paced and often fractured culture we all seek inner peace and unity. The Universal Monk is a powerful way for everyone of any state of life to find it. It is written from John Michael Talbot's experience in public international ministry and as founder and spiritual father of the Brothers and Sisters of Charity, a new integrated monastic community of celibates, singles who can marry, and families who live in an integrated monastery or in their own homes. It walks us through a treatment of the current issues that face us?such as the great recession, political polarization, and the sex abuse crises in the church?with real spiritual and lifestyle answers that come from a fully unified and integrated life in God. If you are tired of the "same old, same old," this book is for you!

John Michael Talbot was born in Oklahoma City in 1954 and grew up in Indianapolis. He moved to Arkansas and founded the Brothers and Sisters of Charity at Little Portion Hermitage in 1982, which he still serves as minister general. He was a founding artist of Sparrow Records in 1976. After a successful career with Sparrow, in 1992 John Michael founded his own record label, Troubadour for the Lord, and is now recognized as one of Catholic music?s most popular artists. Talbot is author of Reflections on St. Francis (Liturgical Press). He has been married to Viola Talbot since 1989 and leads an active concert and teaching ministry from his home at Little Portion Hermitage Monastery.

John Michael Talbot is the real deal. Here is a guide to new monasticism that exudes wisdom and carefully considers the questions that have arisen through decades of practice. If you're serious about asking what monasticism means for the church today-about what it means for you-read this book.
Jonathan Wilson-Hartgrove
Author of New Monasticism
Co-compiler of Common Prayer: A Liturgy for Ordinary Radicals
Member of the Rutba House community in Durham, North Carolina


This book presents one of the first views from inside a new type of monastery in the Church. Drawing on John Michael Talbot's twenty-five plus years in community, it breathes the air of honest-to-God daily experience of monastic life, and in a very complex type of community, comprising celibates, marrieds, singles, and children. The new monasticism, with its many ways of participating, provides access from wherever you are into an ancient contemplative path.
Abbot Jerome Kodell, OSB
Subiaco Abbey, Arkansas