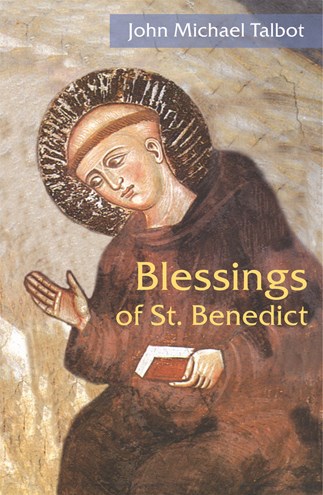 Blessings of St. Benedict is a devotional that brings the Rule of St. Benedict to all people of every state of life. In these brief and accessible reflections on this ancient monastic rule, John Michael Talbot offers simple and timeless monastic wisdom for everyone. Dipping into the well of spirituality that is both practical and mystical, this book is designed for both monastics and monastics at heart.

John Michael Talbot was born in Oklahoma City in 1954 and grew up in Indianapolis. He moved to Arkansas and founded the Brothers and Sisters of Charity at Little Portion Hermitage in 1982, an integrated monastic community of celibates, singles who can marry, families, and domestics who live in their own homes. He still serves as minister general. He was a founding artist of Sparrow Records in 1976. After a successful career with Sparrow, in 1992 John Michael founded his own record label, Troubadour for the Lord, and is now recognized as one of Catholic music's most popular artists. Talbot is author of Reflections on St. Francis (Liturgical Press, 2009) and The Universal Monk (Liturgical Press, 2011). He has been married to Viola Talbot since 1989 and leads an active concert and teaching ministry from his home at Little Portion Hermitage Monastery.

John Michael Talbot is not only a troubadour of God, but over 25 years ago founded a modern community of men and women. In this book he returns to the roots of Christian monasticism and, based on his own lived experience, comments on the Rule of Benedict, to make its spiritual riches fruitful for us contemporary men and women. He reads the Rule with a modern eye and opens it up as much for people who live in a community as those living in the world of everyday work. For this reason, these meditations are also suitable for Benedictine secular oblates. A life based on the principles of the Rule of Benedict makes the world a more Christian and more human place. And with this, Benedict himself becomes a blessing for our times.
Notker Wolf, OSB, Abbot Primate of the Benedictine Order


This handy introduction to the Rule of Benedict would be an ideal gift for someone seeking an overview of St. Benedict's teaching. The brief chapter by chapter commentaries take the mystery out of unfamiliar terms and usages from the sixth century. The book explains the original application of the monastic norms and shows how they may be adapted in our time for use in communities and families.
Abbot Jerome Kodell, OSB, New Subiaco Abbey