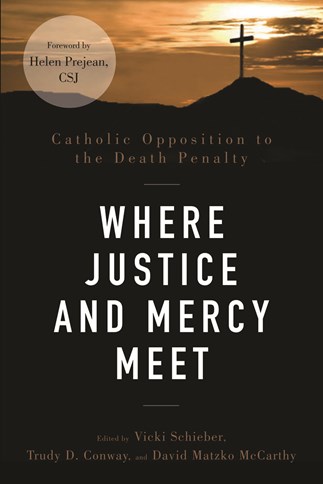 Where Justice and Mercy Meet

Where Justice and Mercy Meet: Catholic Opposition to the Death Penalty comprehensively explores the Catholic stance against capital punishment in new and important ways. The broad perspective of this book has been shaped in conversation with the Catholic Mobilizing Network to End the Use of the Death Penalty, as well as through the witness of family members of murder victims and the spiritual advisors of condemned inmates.

The book offers the reader new insight into the debates about capital punishment; provides revealing, and sometimes surprising, information about methods of execution; and explores national and international trends and movements related to the death penalty. It also addresses how the death penalty has been intertwined with racism, the high percentage of the mentally disabled on death row, and how the death penalty disproportionately affects the poor.

The foundation for the church's position on the death penalty is illuminated by discussion of the life and death of Jesus, Scripture, the Mass, the Catechism of the Catholic Church, and the teachings of Pope John Paul II. Written for concerned Catholics and other interested readers, the book contains contemporary stories and examples, as well as discussion questions to engage groups in exploring complex issues.

David Matzko McCarthy is the Father Forker Professor of Catholic Social Teaching in the theology department at Mount St. Mary's University. His five books and numerous articles and presentations are in the areas of moral theology and Catholic social teaching. He is also the founding editor of the Journal of Moral Theology. His most recent book is Sharing God's Good Company: A Theology of the Communion of Saints (Eerdmans, 2012).

Trudy D. Conway is a professor of philosophy at Mount St. Mary's University. Her two books and scholarly articles and presentations are in the areas of contemporary philosophy, virtue ethics, and intercultural dialogue. She is actively involved in abolition work to end the death penalty and contributes to the educational initiatives of the Catholic Mobilizing Network to End the Use of the Death Penalty.

Vicki Schieber is a member of the organizational team of the Catholic Mobilizing Network to End the Use of the Death Penalty (CMN) and staffs CMN's internship and educational programming initiatives at Mount St. Mary's University. She served on the 2008 Maryland Commission on Capital Punishment and is actively engaged in state-level abolition work across the United States. As the mother of a murder victim, she is active in murder victim families support groups.

Where Justice and Mercy Meet educates readers about the reality of the death penalty in the United States-from methods of execution to the influence of racism and poverty. Through well-researched and thought-provoking essays that combine history, statistics, and personal testimony, we learn of the grim reality of state executions. More crucially, the book examines the arguments against capital punishment that stem from a rich Catholic tradition of forgiveness, love, and discipleship. We discover that, for criminal justice to be truly just, we must take into account the mercy of God's love. This message is truly one to be spread.
Liz Lefebvre, Assistant Editor, U.S. Catholic


The editors deftly weave story, description, and analysis to introduce and review the sixteen contributions to this collection, creating a coherent, compelling Christian argument against the death penalty in the United States. The heart of the argument is theological, rooted in rich exposition of liturgical practice, scripture, tradition, and church teaching.
The Christian Century


Where Justice and Mercy Meet combines solid moral reflections on the death penalty with captivating stories of people caught up in this system. Both deeply interesting and educational, this book should reach a wide diversity of readers.
Richard C. Dieter, Executive Director, Death Penalty Information Center, Washington, DC


I have written articles, taught classes, and spoken to church groups about capital punishment; in my judgment this book is the most accessible resource now available for engaging, informing, and perhaps even transforming how readers view the death penalty.
Tobias Winright Saint Louis University


Abolition of the death penalty deserves the same support as abolition of slavery. Not only Catholics but the general public increasingly believes that innocent people are executed because the criminal justice system is patently unfair for a host of reasons and is not needed for public safety. Where Justice and Mercy Meet: Catholic Opposition to the Death Penalty is a treasure trove of information on the necessity and urgency to abolish an antiquated approach to capital crimes.
Archbishop Joseph A. Fiorenza, Archbishop Emeritus of Galveston-Houston


Schieber, Conway, and McCarthy have put together a true Catholic meditation on the death penalty. Their authors bring us into an immediate consideration of what the death penalty entails and shepherd us through a variety of considerations, including the evolving tradition of Catholicism that finally and inevitably brings us to oppose this form of punishment. What is most effective about this collection is just how mindful the editors are of the readers. They accompany us with introductions, narratives, testimonies, and questions such that we cannot eventually avoid the question about whether as Catholics we can in any way speak approvingly of this anti-life practice. A prophetic and necessary work for our time that will hopefully awaken us all to a very dark and hidden, and profoundly unchristian, practice. Well done!
James F. Keenan, SJ, Founders Professor in Theology, Boston College


Where Justice and Mercy Meet is an indispensable resource for professors, teachers, catechists, and prison and social justice ministers. Widely accessible, it maintains intellectual rigor as it witnesses to the "hopeful perseverance" of Dorothy Day in the subversive joy of the Gospel. Take up this book in hopeful perseverance to end a practice that diminishes the humanity in and between all of us.
American Catholic Studies