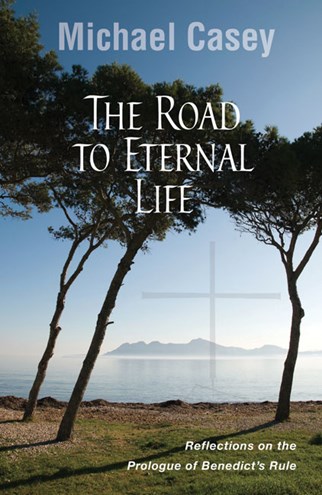 The Road to Eternal Life

Reflections on the Prologue of Benedict's Rule
Michael Casey, OCSO

In the Prologue of his Rule, St. Benedict maps out the road that leads to heaven; he lays the foundation for life in a community that seeks God. The themes that are present throughout the Rule—obedience, humility, prayer, fear of the Lord, eternal life—are grounded in the Prologue.

By reflecting on the Prologue one verse at a time, Michael Casey, OCSO, delves into the richness of meaning that can be found in Benedict's words. These reflections, first given as talks and made available on his community's web site, build a bridge between the sixth-century text and twenty-first-century Christians. In The Road to Eternal Life, Casey invites readers to reflect on the Prologue in light of their own experiences, to seek "the road that leads to salvation."

Michael Casey, OCSO, has been a monk of Tarrawarra Abbey (Australia) since 1960. After completing a degree in Scripture at Leuven, he received his doctorate from Melbourne College of Divinity for a study of desire for God in the writings of Bernard of Clairvaux. For the past decades he has been engaged in exploring different aspects of monastic spirituality, writing, and giving conferences throughout the English-speaking monastic world. His books include Strangers to the City (Paraclete Press, 2005), A Guide to Living in the Truth (Liguori, 2001), and Sacred Reading (Liguori, 1996).

As usual with Michael Casey's books, The Road to Eternal Life is a treasure of monastic wisdom made accessible to people of today, in lay or monastic life. It doesn't sacrifice depth but gives the reader the strong meat necessary to grow in the spiritual life.
Christine Fletcher, Benedictine University, Lisle, IL


Recently I asked Brother Patrick Hart of Gethsemani who was the best writer of our times. He said, you mean, after Merton? I said, yes. Who would be the best of my generation? He replied, without hesitation, Michael Casey, OCSO. Brother Patrick went on to say, he writes with clarity and depth. Reading this new book on the Prologue of the Rule of Benedict confirms Brother Patrick's affirmation.
Meg Funk, OSB, Our Lady of Grace Monastery, Beech Grove, Indiana


Cistercian Michael Casey brings authority to his reflections on the Prologue on the Rule of Benedict because of intellectual study. But his words transmit clarity and depth because of his many years of lived experience.
Meg Funk, OSB, Our Lady of Grace Monastery, Beech Grove, Indiana


This book is a fine, careful pondering of one of the best-loved sections of Benedict's Rule. Appropriate for all spiritual seekers who yearn to shape their life on gospel values.
Books That Merit Attention