How a Sacrament of God's Grace Became All about Us 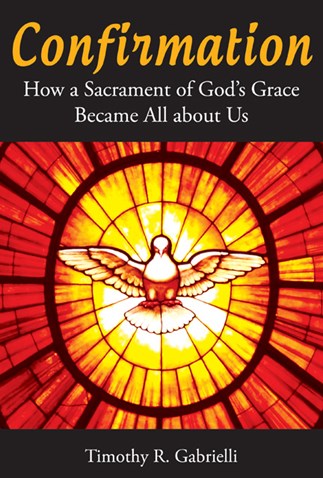 Timothy Gabrielli is to be commended for having navigated with great balance and skill the complexities regarding the theology and practice of the Sacrament of Confirmation, positing his exploration within the increasingly diverse cultural reality that is the twenty-first century Church in North America. The historical, theological, and pastoral depth of this work, written in a clear and accessible style, will make this book a very useful resource for scholars and pastoral practitioners alike.
Keith F. Pecklers, SJ, Pontifical Gregorian University, Pontifical Liturgical Institute

Timothy Gabrielli jumps with both feet into the "ongoing conversation" about the meaning of Confirmation.. He writes clearly and insightfully. As one who has participated actively in this conversation for several decades, I recommend this book to all who play a role in helping young Catholics to develop and deepen a relationship with the indwelling Person of the Holy Spirit.
Sister Kieran Sawyer, SSND, Confirming Faith, Ave Maria Press, 1980, 1995, "A Case for Adolescent Confirmation" in Confirming the Faith of Adolescents, ed. By Arthur Kubick, Paulist Press, 1991

Gabrielli takes readers through the many practices and theologies of Confirmation in the United States since the beginning of the twentieth century. Not only will those who direct Confirmation programs find this a valuable resource but so will pastors and those who work in diocesan offices.
Pastoral Liturgy

Anyone discussing confirmation must bring to the conversation hefty amounts of courage and wisdom, and Timothy Gabrielli does bring both. His survey of theological, psychological, charismatic, and humanist motifs-which, since Pius X's 1910 Quam Singulari, have been used to explain the meaning of confirmation-highlights how different understandings of the sacrament have been influenced by the evolving relationship of Catholics to the American culture. Emphasizing that confirmation confers the gift of the Person of the Holy Spirit, Confirmation: How a Sacrament of God's Grace Became All about Us is a worthy contribution to our study of the sacrament many consider still to be "in search of a theology."
Fr. Kurt Stasiak, OSB, Professor of Sacramental-Liturgical Theology, Saint Meinrad Seminary

Timothy Gabrielli's study of confirmation and U.S. culture in the twentieth century is a welcome addition to the literature on this sacrament "in search of a theology." This book explains why we think about confirmation in the different ways that we do and it encourages those charged with preparing others for this sacrament always to keep in mind that the Catholic faith and its sacramental practices occur in a cultural context that always has an impact on how the Gospel is understood and lived. I highly recommend this book for religious educators or anyone who wants a deeper understanding of the interplay between culture and sacramental theology/practice.
Timothy Brunk, Associate Professor of Theology, Villanova University

Timothy Gabrielli has added an important page to the literature on the history of confirmation. His survey of the 20th-century meaning and practice of confirmation in the United States is unmatched. His conclusions will help all of us rethink the assumptions we have ascribed to this sacrament.
Rev. Paul Turner, Pastor of St. Anthony Catholic Church in Kansas City, MO, and author of Ages of Initiation