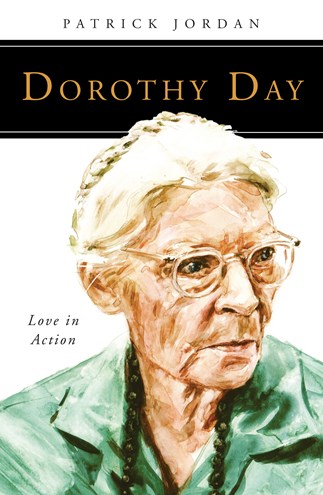 By any measure, Dorothy Day lived a fascinating life. She was a journalist, activist, single mother, convert, Catholic laywoman, and cofounder of the Catholic Worker Movement.

A lifelong radical who took the gospels at their word, Dorothy Day lived among the poor as one of them, challenging both church and state to build a better world for all people. Steeped in prayer, the liturgy, and the spiritual life, she was jailed repeatedly for protesting poverty, injustice, and war. Through it all, she created a sense of community and remained down-to-earth and humanly approachable.

To have known Dorothy Day was to have experienced not only her charm and humanity, but the purposefulness of her life. In Dorothy Day: Love in Action, Patrick Jordanwho knew her personallyconveys some of the hallmarks of Day's fascinating life and the spirit her adventure inspires.

Patrick Jordan is a former managing editor of The Catholic Worker. He and his wife Kathleen were associated with Dorothy Day from 1968 until her death in 1980. From 1984 until 2012, Jordan was an editor at Commonweal magazine. He is the editor of Dorothy Day: Writings from Commonweal (Liturgical Press, 2002) and, with Paul Baumann, coedited Commonweal Confronts the Century (Touchstone, 1999). He serves on the advisory board of the Dorothy Day Guild.

Jordan writes as one who knew her well, and so the book is able to convey a vivid sense of Day as a person. . . . Instead of offering a chronological narrative, he weaves together his living sense of Day's personality with some of the major themes of her work. The result is illuminating, even for those who already know a lot about Day.
David Cloutier, Commonweal


This is a well-told story of an inspiring and controversial life. . . . It is worth reading this book to discover Dorothy Day's depths of spiritual searching and her recognition that if we hope to change the world, we have to being with ourselves. Read Patrick Jordan's account and decide which aspect of this incredible life speaks to you.
Methodist Recorder


I love this book. It makes me feel as if I really knew Dorothy Day in her lifetime, as Patrick Jordan did. With his perceptive observations and deep knowledge of her writings, he captures Day in all her inspiring, saintly contradictions. He tells a story that is at once witty and precise, moving and concise. It will appeal not only to those who know of Day and want to reflect further, but to those yet to discover her and the great meaning her life holds for us today.
Paul Moses, author of The Saint and the Sultan: the Crusades, Islam and Francis of Assisi's Mission of Peace


In Patrick Jordan's portrait, an inspiringly authentic Dorothy Day springs to life. The energetic-but-searching young journalist finds her adult vocation as a joyful prophet. In the author's view, Dorothy's faith is both a gift and hard-won, the result, for example, of living with the poor, nonviolent resistance and protest against injustice. Jordan's privileged position as a close friend, neighbor and co-worker of Dorothy for twelve years becomes a boon to every reader of this clear and uncommonly mature reflection.
Karen Sue Smith, former Editorial Director, America


Dorothy Day's accomplishments were as vast as a continent; to grasp them requires a guide. Let it be Patrick Jordan, who dwelt with Day and their fellow Catholic Workers in the mystery of poverty. No one is better than Jordan at explaining the moral principles that woke Day up in the morning and led her to do battle with the world. He takes the reader into the adventure of Day's spiritual life, her jailings in the cause of peace, and the crossroads moment when she decided that, from then on, she would give of her soul and substance to the 'wretched of the earth.' And how she calls us to do the same.
Jim O'Grady, New York Public Radio, author of Dorothy Day: With Love for the Poor


Patrick Jordan's evocation of Dorothy Day is so fresh and vivid that you feel he was in conversation with her just last week, not several decades ago. This book puts the reader in her company, too.
Paul Elie, author of The Life You Save May Be Your Own


An impressive, compelling, and exceptional life story that is part of the outstanding People of God series.
The Midwest Book Review


This book can be recommended to a wide readership. Reader-friendly and inspiring, it would be a good choice for high-school students. It reads quickly enough so that everyone in the parish book club would find time to finish it.... In short, it's a wonderful book and a fine addition to this Liturgical Press series of concise and inspiring biographies for the general reader.
Catholic New World


For persons who may have heard only vaguely of Day and her work, this book is an excellent introduction to a woman whose whole life was `love in action.'
Grace & Truth


Patrick Jordan's book Dorothy Day: Love in Action is a clear, concise and keenly observed biography of the feisty, saintly and sometimes contradictory social activist Pope Francis praised during his historic speech to Congress. . . . There is no plaster mold for this saint.
America


It is a noteworthy attempt to reveal a portion of the soul and mind of Dorothy as Jordan perceived it. It is a difficult space for a biographer to occupy, but he does it with such sensitivity and clarity that the reader leaves this book with a feeling of knowing Dorothy Day a bit better.
American Catholic Studies