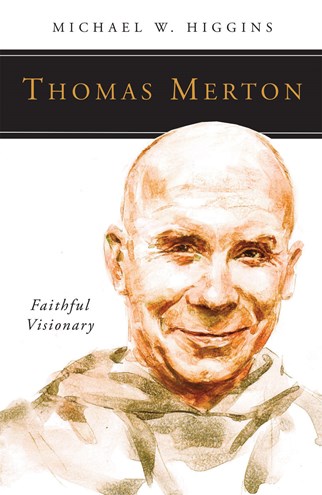 Thomas Merton was the consummate postmodern holy one: flawed, anti-institutional, a voice for the voiceless. But he was also a classical traditionalist: centered, obedient, in search of stability. He was a religious thinker of remarkable insight, a social commentator of courage and conviction, and a writer of startling virtuosity.

Michael W. Higgins recounts the life of this insatiable wanderer. He explores the various layers of influence and evolution in Merton's thought and spirituality. This book tells the remarkable story of a life that remains to be understood from its beginnings and long after its premature ending.

Michael W. Higgins is vice-president for Mission and Catholic Identity at Sacred Heart University, past president of St. Jerome's University in Ontario and St. Thomas University in New Brunswick, a columnist, editor, radio documentarist, and television commentator. He is the author and co-author of numerous books, including bestsellers Power and Peril: The Catholic Church at the Crossroads; Stalking the Holy: In Pursuit of Saint-Making; and Genius Born of Anguish-the Life and Legacy of Henri Nouwen.

Thomas Merton is the most significant spiritual writer of the twentieth century. His writings are already classics that will have influence well into the twenty-first century and beyond. Michael Higgins captures not only the significance of Merton's life but also his spirit. Thomas Merton was a literary genius and so is Michael Higgins. Merton comes alive in the pages of this beautifully written book that you will find both informative and inspiring.
Anthony Ciorra, PhD, Assistant Vice President for Mission and Catholic identity and Professor of Theology at Sacred Heart University, Fairfield, Connecticut

Michael Higgins has painted an exuberant, broad-brushed portrait of the "startling and unusual" life of a twentieth century spiritual master and visionary. This book is perfect for those new to Thomas Merton, but also provides a well-acquainted reader the pleasure of being reintroduced to the significant highlights of Merton's legacy by Higgins' fast-paced, critically insightful and always chiseled prose.
Jonathan Montaldo, editor, A Year with Thomas Merton

A rich introduction to Thomas Merton that can appeal to those making a first acquaintance as well as those well-read in the famed Trappist's abundant works. Higgins distills major events of Merton's life, numerous influences on his thought, and his multi-layered contradictions in an engaging and honest sketch of probably the most well-known monk of recent times.
American Benedictine Review

In this carefully-crafted biographical account of Thomas Merton, the faithful visionary, Michael Higgins combines his scholarly erudition with a palpable enthusiasm for his subject to produce an engaging text that will be well-received by Merton devotees while being simultaneously meaningful to those new to the life and trials of Merton as radical recluse and life-long pilgrim. Indeed, Higgins' unfolding of a troubled soul on a personal quest will speak very pointedly to generations of those in search of inner peace and personal fulfillment in our turbulent world. Faithful Visionary is dramatic reminder of the timeless wisdom of Augustine's assertion that "our hearts are restless until they find rest in thee."
Douglas Letson, President Emeritus of St. Jerome's University in Waterloo, Ontario

In Thomas Merton: Faithful Visionary Michael Higgins, who is recognized internationally for his writing on Merton, shows himself to be a master of the art of biography. With acumen and balance he focuses vividly on exactly those issues which a reader of Merton ought to be aware of and to understand.
Ross Labrie, Professor Emeritus, University of British Columbia

Michael Higgins writes a clear and compelling tale of the monk's faithful yet boundary-breaking life. . . . One should turn to this book if seeking an introductory and quick read on the life of Merton-it will provide both an overview and an appropriate analysis of Merton's early life, his moments of conversion, times of tribulation, and a sliver of his mysterious draw to the East.
Kellan Day, Editor, faithAlivebooks.com

Thomas Merton was a wise, complex, playful, and at times, paradoxical poet-monk. As a public intellectual grounded in Catholic history and theology and accustomed to clarity, Michael W. Higgins lucidly charts Merton's life from his birth in France to his death in Thailand. Thomas Merton: Faithful Visionary admirably envelopes the shifts and swerves in Merton's layered life in a warm and welcoming conversation.
J.S. Porter, author of The Thomas Merton Poems and Thomas Merton: Hermit at the Heart of Things

This fast-paced, engaging and at times provocative narrative is not without its attractions for those familiar with the monk's life and work as well.
Patrick F. O'Connell, The Merton Journal

Anyone unaware of the life of Merton could get a quick overview of the monk's life in this engagingly written narrative. [Higgins] artfully weaves in snapshots of many of the major figures who figured in Merton's life. . . . Higgins sees Merton as a prophetic figure who desired to pursue issues that more conventional Catholic commentators either did not touch or did approach gingerly.
Lawrence S. Cunningham, American Catholic Studies

In Thomas Merton: Faithful Visionary, Michael W. Higgins presents a lively biographical dialogue that is rich, and deep, and instantly engaging. Higgins reminds us that we rarely know even those people who may be familiar to us. In these pages, Higgins removes any superficial image of Merton to present a restless seeker, someone who could never fit easily into a formulaic biographical box. This Merton is complex, remarkably gifted, and deeply human because of his vulnerabilities. The gift of this short biography is the way Michael W. Higgins filters decades of scholarly material about Merton and effortlessly guides readers right to the heart of the matter: Thomas Merton himself, that truly faithful visionary and, through his books, a generous friend to all his readers.
Kevin Burns, writer and producer, Ottawa

Michael Higgins provides a fast-paced, engaging, and at times provocative narrative of Merton's restless early life and conversion to Catholicism. The inclusion of numerous excerpts from Higgins' interviews of Merton friends and scholars over the years, not other-wise available, is an attractive feature of the book that makes it worth reading.
Sojourners

With the charm of a storyteller, the skill of a fine writer, and the wisdom of a seasoned scholar, Michael Higgins spins a narrative of an exceptional monk's life and work from conversations, journals, and letters. Thomas Merton: Faithful Visionary offers the reader an opportunity to observe how one person sought and discovered an authentic life in Christ that embraced all humanity and addressed the social issues facing the modern world. With the centenary celebration of Merton's birth approaching, this is a timely publication beneficial to both scholars and laypersons.
Professor David Joseph Belcastro, President of the International Thomas Merton Society, Co-Editor of The Merton Annual

Michael Higgins' eloquent and lively voice shines in this new lay readers' biography of Thomas Merton, giving novices and scholars a fine summary of Merton's life, including the complexity and irony of its many fascinating episodes. Higgins' animated style and its orator's rhetoric make this volume readable in one sitting, with much to ponder beyond its pages. Once again, Higgins has given us a compelling entrance to Merton which is valuable for its breadth and intriguing for the connections and interpretations it offers in situating Merton in the constellation of political, religious and spiritual thought of which he was an integral part in twentieth century America. Higgins calls on the years of study he has given to Merton in order to give us this accessible and concise account of American's hermit-monk at the center of his culture's history.
Lynn R. Szabo, Professor of English, Trinity Western University, Vancouver