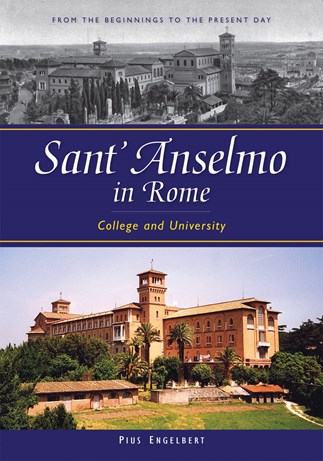 College and University; From the Beginnings to the Present Day
Abbot Pius EngelbertTranslated by Henry O'Shea, OSB

Sant'Anselmo in Rome was founded in 1888 by Pope Leo XIII for the training of Benedictines from all over the world in philosophy and theology. To this day, Sant'Anselmo is characterized by the interplay between the Benedictine College and the university entrusted to it, the Pontificio Ateneo di Sant'Anselmo, which for decades has also welcomed non-Benedictine students.

For well over a century Sant'Anselmo has had a strong influence on Benedictine monasteries on every continent while providing a lasting service to the Universal Church through the pursuit of academic liturgical and theological studies. What were the burning issues and events in the history of Sant'Anselmo? What was the guiding spirit among professors and students in the different periods of Sant'Anselmo's existence? How did one live in the College? These are just a few of the questions addressed by Abbot Pius Engelbert's history of the College and University.

Pius Engelbert, OSB, is the former abbot of the Abbey of St. Joseph at Gerleve in Westphalia, Germany. For many years he was professor of ecclesiastical history at Sant'Anselmo, where he was also responsible for the reorganization of the institute's archives.

And Sant'Anselmo has in fact become the central place of Benedictine studies and is today a place for dialogue with the modern world. Over the past one hundred years, about two-thirds of all abbots studied there. Sant'Anselmo has become a unifying element for the Benedictine Order as a whole and all the more important today when Benedictines are present all over the world.
Abbot Primate Notker Wolf, OSB


"Liturgical Press merits a note of gratitude for providing a translation of the German original and packaging it in a durable, elegant edition. Engelbert has certainly given us the historical groundwork for an institution that until this book has lacked a scholarly and synthetic treatment."
Joel Rippinger, OSB, American Benedictine Review


"Pius Engelbert has written a very fine book. It is a joy to behold the attractive layout and the excellent photos. This is a book that needed to be written."
Terrence Kardong, OSB, Tjurunga


"From cover thru interior, the combination of black-and-white with color photography should make a good presentation on any coffee table."
Catholic Press Association award, 2nd place