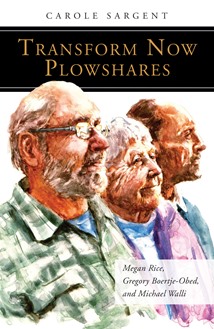 In July 2012, a Holy Child sister and two Catholic Workers committed the largest breach in US nuclear security history. They entered an enriched uranium facility armed with candles, bread, Bibles, and roses, to pray and paint peace slogans. As Transform Now Plowshares, they hoped to put nuclear weapons—which target civilians in violation of the Geneva Conventions and UN treaties—on trial, making international news. This book shares their discernments of conscience and the civil resistance legacy of Plowshares with its background of Dorothy Day's Catholic Worker, while also engaging the work of the Berrigan brothers, the Catonsville nine, and the recent Kings Bay Plowshares seven. Learn their stories and see the principles of Catholic Social Teaching in action.

Carole Sargent, PhD, is an associate of the Sacred Heart and founding faculty director of Georgetown University's Office of Scholarly Publications. She helped RSCJ sisters establish Anne Montgomery House in Washington, DC, where Megan Rice, SHCJ, was a neighbor and friend. With Drew Christiansen, SJ, she coedited A World Free from Nuclear Weapons: The Vatican Conference on Disarmament (Georgetown University Press, 2020), and she has published previous books with Farrar, Straus & Giroux. She writes from the contemplative scholars' house she founded (www.publishingadvising.com/house).

"Rich in detail, context and compassion, Carole Sargent's book illuminates how religion and spirituality motivate resisters, and how resisters build a multi-generation resistance against militarism and injustice."
Dan Zak, reporter for The Washington Post and author of Almighty: Courage, Resistance and Existential Peril in the Nuclear Age


"Carole Sargent tells this holy story of nuclear disarmament with compassion and insight, sharing the lives of the Transform Now Plowshares participants with deep gratitude and respect. Imagine a culture and judicial system (ours) that sends an 84 year-old nun to prison for three years for protesting nuclear weapons. Imagine a society that feels compelled to work building nuclear bombs in order to provide for their families. The call of a well-informed conscience to sacramental action, to disturb the status quo of a permanent war economy is the solution to our dilemma of the United States in the twenty-first century. May we regain our souls through the sharing of stories such as these of faith, hope, and love."
Martha Hennessy, a granddaughter of Dorothy Day and member of the Kings Bay Plowshares 7 and the New York Catholic Worker


"With courage and singleness of purpose, the valiant peacemakers in this book who have committed their lives to rid the world of nuclear weapons never acted alone, but always in community—be it Catholic Worker, Plowshares, family—with hearts longing to bring about the beloved community. They are beacons of hope in our divided world."
Clare Pratt, RSCJ, former Superior General of the Religious of the Sacred Heart


"Greg, Sr. Megan, and Michael have their Dante in this enthralling sojourn into the inferno of a main U.S. nuclear extermination oven . . . but unlike Dante's Hell, this abyss retaliates . . . be their Virgil by reading of the consequences."
(Rev) Steve Kelly, S.J., Disarm Now Plowshares and Kings Bay Plowshares 7