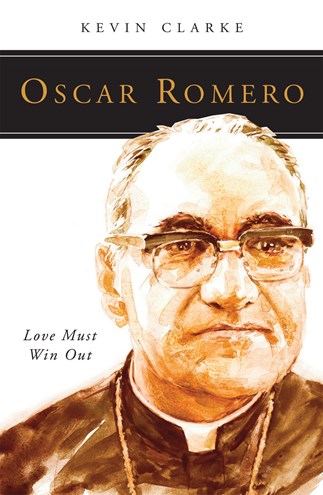 Love Must Win Out
Kevin Clarke

With the cause for his beatification reportedly moving along rapidly now at the Vatican, this biography of a people's saint traces the events leading up to the assassination of Archbishop Oscar Romero at a chapel altar in San Salvador and the reverberations of that day in El Salvador and beyond.

This in-depth look at Archbishop Romero, the pastor-defender of the poor and great witness of the faith, offers a prism through which to view a Catholic understanding of liberation and how to be a church of the poor, for the poor, as Pope Francis calls us to be.

Kevin Clarke is senior editor and chief correspondent at America and its web site, americamagazine.org, where he contributes podcasts, video reports, news reports, and features. He is the former editor of Salt of the Earth magazine and former senior editor, columnist, and web content manager for U.S. Catholic magazine and uscatholic.org.

A superb short introduction to the life of one of the great prophets of the 20th century. Kevin Clarke's beautifully written and solidly researched biography of Archbishop Romero is an inspiring introduction to the life of a man who gave everything-including his life-for the poor, for the church and for God. Highly recommended.
James Martin, SJ, author of Jesus: A Pilgrimage


Oscar Romero: Love Must Win Out is a deeply researched and carefully annotated retelling of the archbishop's conversion from a clerical and rule-bound, though gentle and sincere, practitioner of charity to an inspired and daring advocate for justice. It is an intimate portrait of a man searching for God, struggling against his own demons of scrupulosity, need for control and loneliness before he becomes the Monsignor Romero we know.
Eileen Markey, America

Q&A with Kevin Clarke, author of
Oscar Romero: Love Must Win Out
What’s the most interesting thing you have learned about Archbishop Romero that you didn’t know when you started the project?
I'd say one of the most interesting things I have learned is what a fierce culture warrior Romero had been up to his appointment as bishop of Santiago de María, where he began to confront some of the military's oppressive acts up close. I knew that Romero had been considered conservative in his past and somewhat "off the bus" in terms of Vatican II and Medellín, but I did not know how deep he was in the trenches fighting against the priests who were pushing for pastoral and theological change in the church in Central America. I was also very moved to hear him discussing his personal fears as he took bolder steps to confront the Salvadoran military and economic elite in the last years of his life. He knew he was putting himself in harm's way, and it filled him with fear sometimes. I guess we all have our ideas of what "heroic" looks like in the wild. To read eyewitness accounts of the terrible physical fear he had to confront almost daily may offer a rare glimpse of what real heroism looks like. He was afraid of suffering, frightened of violence, worried about what might happen to him. But in the end he found the courage, not to overcome his fears, but to live with them and do the work he knew he had to do despite them. It only cost him his life.
How is this book different from other resources on Romero?
I am a good storyteller, and this is a great story. I am going to stick to the story. I hope what I can do is tell his story plainly, engagingly. I think this Romero book could be a good base for deeper exploration of the historical and spiritual themes that intersect in the life of Oscar Romero.
Do you have a favorite moment in the life of Oscar Romero?
I think he was at his best on the night of the killing of Rutilio Grande and the days that followed. It was a pivotal moment that required steadfast leadership and grand gestures, and he quickly provided both with his decision to approve the one nationwide Mass the Sunday following Grande's murder and his refusal to be deterred from it. He came to himself that night; he rejoined the people fully and he never left them again. And of course so many of his homilies were (and I won't say just “prophetic”) powerful prophecies about what was to come in Central America. As much as they remain deeply moving, they are chilling now in retrospect. Another "if only we had listened" to add to a sorry pile in human history.
Is it true that the killing of Rutilio Grande was as momentous for Romero as we have sometimes heard? How did it change him and, on the other hand, how did his outlook and ministry remain consistent after the killing?
There is no doubt that the long day and night of the killing and the celebration of the life of Rutilio Grande effected an acceleration in his thinking and a new boldness and steadfastness in his public pronouncements. He had been full of indecision before that shooting, but the ghastliness of it was enough to convince him to trust his instincts and take a stand. At the same time I wonder if too much is made of "Rutilio's miracle" in terms of it being a moment of conversion. Romero did not need any lessons in the suffering of the poor; he had been around and among poverty his whole life.
One criticism of Archbishop Romero is that his ministry became too enmeshed in politics. “He was too political.” How, in your opinion, do we sort out what is politics and what is simply living our faith in concrete circumstances of the world we find ourselves in?
This is a source of confusion in just about all societies, but it was especially pointed—and dangerous—in a socio-economic system as dysfunctional as El Salvador's at that time. It is not a political belief that a society should maintain a minimum respect for the sanctity of life and the innate dignity of every human being, but it inevitably becomes a political gesture to articulate that belief out loud in the civic commons where dialogue takes place and change can be initiated. In a culture as warped by inequity and indifference as El Salvador was, to make any moral demand that threatened the status quo was "political." As many learned at the cost of their lives, studying the Bible in such a culture was "political." Do what Romero did: read Scripture, study the teaching of the church, follow your heart, run your race, and let others deride you as "political." And don't kid yourself that more mature and more affluent liberal democracies don't suffer from the same destructive tendencies that were so obvious in El Salvador.
Click here to download the discussion guide
SHOW CART
“
Account Login
Frequently Asked Questions
Shipping Information
Return Policy
Change of Address
Canadian Orders
International Distribution