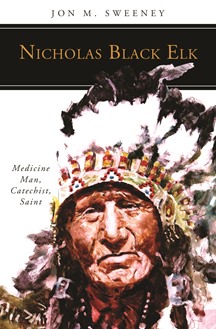 Servant of God Nicholas Black Elk (1863—1950) is popularly celebrated for his fascinating spiritual life. How could one man, one deeply spiritual man, serve as both a traditional Oglala Lakota medicine man and a Roman Catholic catechist and mystic? How did these two spiritual and cultural identities enrich his prayer life? How did his commitment to God, understood through his Lakota and Catholic communities, shape his understanding of how to be in the world?

To fully understand the depth of Black Elk’s life-long spiritual quest requires a deep appreciation of his life story. He witnessed devastation on the battlefields of Little Bighorn and the Massacre at Wounded Knee, but also extravagance while performing for Queen Victoria as a member of “Buffalo Bill” Cody’s Wild West Show. Widowed by his first wife, he remarried and raised eight children. Black Elk’s spiritual visions granted him wisdom and healing insight beginning in his childhood, but he grew progressively physically blind in his adult years. These stories, and countless more, offer insight into this extraordinary man whose cause for canonization is now underway at the Vatican.

Jon M. Sweeney is an independent scholar and one of religion’s most respected writers. His many books include James Martin, SJ: In the Company of Jesus, in the “People of God” series; The Pope Who Quit, which was optioned by HBO; and The Pope’s Cat, a popular fiction series for children. He edited A Course in Christian Mysticism by Thomas Merton, published by Liturgical Press. Sweeney writes regularly for America in the US, and The Tablet in the UK. He is the publisher at Paraclete Press in Massachusetts, and lives in Milwaukee, Wisconsin with his wife and daughters.

"This book is a quick read, which gives a well-researched snapshot of both the real history and the personal story of a remarkable man."
Catholic Books Review

Sweeney harnesses his gifts as a storyteller and puts Nicholas Black Elk where he belongs: with the greatest saints and mystics of the Christian tradition. A book for everyone, whether those looking for an introduction to Black Elk's life or experts looking to see unseen facets of his witness.
Damian Costello, author of Black Elk: Colonialism and Lakota Catholicism, vice-postulator of the cause of canonization for Nicholas Black Elk

This important, informative book honors the complexities of conversion and inculturation. It will be an inspiring read for any spiritual seeker.
Julia Walsh, Franciscan Sister of Perpetual Adoration, and host of the Messy Jesus Business podcast

Servant of God Nicholas Black Elk lived a complex life during a complicated time. Jon Sweeney skillfully relates the monumental cultural and spiritual losses the Lakota people endured from US governmental colonialism as he simultaneously traces Black Elk’s lifelong quest of the Holy. From a transcendent childhood vision to a Native healing practice to Catholic baptism and ministry, Black Elk walked his own ‘good red road’ as a Lakota Catholic, integrating both faith traditions into his spirituality. Readers may come away understanding that this holy man—who prayed comfortably with both a Rosary and a pipe—well deserves to be named the first US Native American male saint.
Judith Ann Zielinski, OSF, Writer/Producer, Documentary film Walking the Good Red Road: Nicholas Black Elk’s Journey to Sainthood

"Pope Francis has challenged all of the baptized to understand themselves as missionary disciples. If we are looking for modern saints to pattern ourselves after, there are few more profound examples of missionary discipleship than Nicholas Black Elk."
St. Anthony's Messenger

Amid a plethora of diverse and conflicting narratives, author Jon M. Sweeney presents the rich spiritual legacy of Nicholas Black Elk with straightforward clarity for novice readers. In so doing, the author draws upon the scholarship of numerous authors, from Nebraska poet laureate John G. Neihardt to anthropologist Raymond D. DeMallie and religious studies scholar Michael F. Steltenkamp, SJ, among others. He deftly introduces young Black Elk’s great childhood vision, his tireless support for his people’s wellbeing, and his lifelong quest to better know and serve the Great Spirit. With diverse examples, the author explains how Black Elk embraced Christianity and pursued a robust catechetical career among his people while grounded in his Lakota culture and identity.
Mark G. Thiel, Archivist at Marquette University