In the Company of Jesus 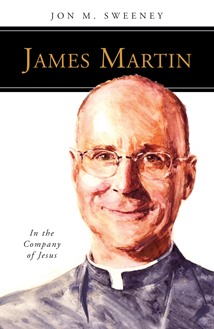 Fr. James Martin, SJ, is one of the most recognized Catholic priests in the United States. His book My Life with the Saints introduced hundreds of thousands of readers to many saintly heroes. More recently, Building a Bridge called the Catholic Church to more respect and compassion for the LGBT Community—and made Martin not only a friend to LGBT people but a lightning rod for some "traditionalist" Roman Catholics. His articulate and winsome personality has endeared him to millions inside and outside the Church. Now it is time to tell the story of his own life, to explore the experiences that made him the person he is today.

And there's no better narrator for the story than Jon M. Sweeney, an award-winning and highly accomplished writer in his own right. In James Martin, SJ: In the Company of Jesus, Sweeney probes Martin's early life, his experiences as a corporate executive, his call to religious life, his ministry and spirituality, his feelings about both the adoration and the criticism he receives from so many, and much more. Readers will come away with a much better understanding of one of today's most interesting and influential Catholics.

Jon M. Sweeney is an independent scholar and one of religion's most respected writers. His books include When Saint Francis Saved the Church; The Enthusiast: How the Best Friend of Francis of Assisi Almost Destroyed What He Started; The Complete Francis of Assisi; and The Pope Who Quit: A True Medieval Tale of Mystery, Death, and Salvation. He edited A Course in Christian Mysticism by Thomas Merton, published by Liturgical Press. Sweeney writes regularly for America and The Tablet, and is publisher and editor-in-chief at Paraclete Press. He lives with his wife and two daughters in Milwaukee, Wisconsin.

Jon M. Sweeney has composed a detailed, fascinating portrait of one of our great spiritual leaders, James Martin. From a not very religious family and after a stint on Wall Street, Martin heard the unlikely call to the Jesuits. That this led to his blossoming into a best-selling author and a controversial spokesperson for welcoming LGBTQI+ persons to the Church is a tale woven with marvels. Sweeney's fastidious research and elegant prose make this a page turner I read with relish and finished with regret. It's a gift to nonbelievers as well as Catholics, lapsed and devout.
Mary Karr, poet and memoirist, author of The New York Times best sellers The Liars' Club, Cherry, and Lit

I received my copy of Jon Sweeney's biography of Fr. James Martin and read it immediately. A fascinating life-much of which I knew, but some of it new, and placed in context. I especially admire what Jim undertook in reaching out to the LGBT community, all in the context of the marginalized, as with his work in Nairobi. Sweeney caught both his humor and his humility and explained how Jim was able to deal with the adverse criticism he has received. Thank you!
Paul Mariani, poet and biographer, author of Gerard Manley Hopkins: A Life

“For those whose hearts and minds are open, the story of Fr. Martin offers a glimpse of what Dietrich Bonhoeffer called ‘costly grace.’ Anyone who is serious about following Jesus--and let go as James Martin did ‘of the need to be loved, liked, or even approved of’ should read this book.”
Catholic Media Association

Sweeney's emphasis throughout the book is on the fact that in spite of how much his audience has grown, Father Martin's ministry has firmly remained focused on the pastoral. In this book most will come away having met or learned more about someone who has a clear vision of his ministry. That may not sound like much; there are, after all, still religious people all around us. But in spiritual direction, the emphasis is not just on us as individuals. It is on us as individuals seeking a relationship with our creator. What Sweeney's book ultimately gives us is a deeper understanding of the life of someone who has helped many people develop and deepen that relationship.
America Magazine

James Martin is one of the most important voices in Christian spirituality today and Jon Sweeney's story of his life and his work will, I promise, make you want to be a better person. We need to define what Christian discipleship means in the present moment. This book will help you do that.
Ronald Rolheiser, author of The Holy Longing and Domestic Monastery

Here's what I can't help but love about Jim Martin: his refreshing humanness, his God-help-us-all humor, his faith in Christ, so grounded, so full of search and questioning, so opposite of resting on your "spiritual laurels," so honest, so alive and unfurling. And his courage. Father Jim's love for the Church impels him to engage in on-going dialogue about dignity for LGBTQ persons, who suffer because of ignorance and prejudice. Courage, Jim. I've stayed in dialogue with my fellow Catholics about the death penalty for 30-plus years. When you love your church, you stay in dialogue.
Sister Helen Prejean, CSJ, Author of Dead Man Walking and The Death of Innocents